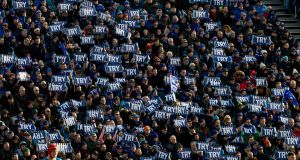 Leinster fans celebrate a try during the Heineken Champions Cup round five match against Lyon at the RDS. Photograph: Morgan Treacy/Inpho

Despite becoming the first team to qualify after just four rounds and compiling 24 points out of a possible 25, such has been the pace set by the other pool leaders as well that Leinster have yet to secure a home quarter-final.

However, were they to beat Benetton in Treviso on Saturday, last season’s runners-up will secure the number one seeding in the knockout stages and thus not only a quarter-final at the Aviva stadium against the number eight seeds (possibly Northampton or Glasgow) but, were they to win that game, a home semi-final as well.

A win for Northampton in Lyon would, on the basis that Toulouse beat Gloucester at home on Sunday, secure them a place in the quarter-finals. Failure to do so would open the door for Glasgow and, potentially, Munster.

Exeter have won the pool, but like the other pool leaders have yet to secure a prized home quarter-final. The Chiefs have never quite cracked Europe but their intent is clear this season and they can ensure a first ever home quarter-final by beating La Rochelle at Sandy Park on Saturday evening, having won each of their three contests against the Top 14 club. Exeter’s only previous quarter-final appearance was in 2016 when they were edged out by Wasps in a dramatic match.

Glasgow, currently 10th in the pecking order, know that a bonus-point win in Sale would be enough to scrape into the quarter-finals if two of three Premiership clubs – Saracens, Gloucester and Northampton – don’t win over the weekend. A win without a bonus point could see them overtaken by Munster.

Clermont, who have already qualified, can seal the pool if they beat Harlequins in the Stoop. If they win with a bonus point, and any one of Exeter, Racing or Toulouse fail to win, the three-time finalists would earn a home quarter-final. Otherwise Clermont will be away, most probably to Racing or Toulouse.

Ulster know that a win of any kind against Bath at the Kingspan will earn them a place in the quarter-finals as the best of the runners-up, at the very least. They would need a bonus-point win and Clermont to gain no more than a losing bonus point against Harlequins for them to top the pool, but even then a home quarter-final looks out of reach given their points differential.

In all likelihood the best runners-up slot and sixth place seeding will mean a quarter-final away to Racing, Exeter or Toulouse.

Racing have secured qualification by winning the pool and can guarantee a home quarter-final in the Paris Defense Arena by beating Saracens in Allianz Park, while they also have a chance of a top-two seeding and, potentially, a home semi-final. Anything less would most likely mean an away quarter-final.

However Saracens’ defence of the title is on the line. The back-to-back champions, now likely to be relegated from the English Premiership, know that a bonus point would effectively mean a place in the last eight.

Munster need either Northampton to pick up no more than two match points in Lyon on Saturday or for Glasgow to be denied a bonus-point win to have any chance of qualifying come their 1pm kick-off against the Ospreys at Thomond Park. Then, a bonus-point win could suffice, provided Racing restrict Saracens to no more than a losing bonus point and Toulouse do likewise to Gloucester. In that scenario, Munster would most likely face Leinster.

Toulouse have won the pool and thus qualified for the knock-out stages, but they are not yet sure of a home quarter-final. However, regardless of results elsewhere, the four-time champions know that a win of any kind at home to Gloucester will nail down a home quarter-final.

Helpfully for them, they kick-off last on Sunday afternoon, and will thus also know exactly what kind of win will be required to overtake Exeter and Racing, thereby obtaining a top-two seeding, and with it a potential home semi-final as well.

Currently eighth in the pecking order, the same applies to Gloucester in terms of reaching the quarter-finals, although the likelihood is that they will need to win.

1 Tipping Point: Eddie Jones’s rhetoric is out of place in a febrile political climate
2 Andy Farrell recalls 13 players to Ireland squad ahead of England clash
3 All in the Game: No Moore medals for Steven Gerrard
4 Ireland backrow of O’Mahony, Van der Flier and Stander to be retained against England
5 Kieren Westwood: ‘I feel obliged to clear my name and defend myself’
Real news has value SUBSCRIBE