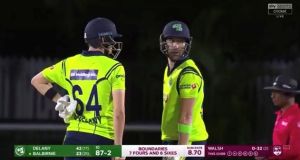 Captain Andrew Balbirnie (36) and Gareth Delany (44) helped Ireland to 147-9 in their innings against the West Indies. Photograph: Sky Sports

Ireland head into the last match of the current T20I series with a 1-0 lead over the West Indies after rain forced the abandonment of play at Warner Park on the island of St. Kitts on Saturday.

Earlier in the evening West Indian captain Kieron Pollard won the toss and elected to bowl first on a bowler-friendly pitch under the lights. Ireland had chosen to go in with an unchanged side from the last match, looking to win their first-ever series victory over a full member team.

After losing last match heroes Kevin O’Brien for 4 (a minute before rain came tumbling down and an almost hour delay followed) and Paul Stirling for 17, Ireland needed the middle-order batters to stand up.

Captain Andrew Balbirnie (36) and Gareth Delany (44) came together and put on 72 runs in the next 43 balls. The 10th over of the match was the highlight of the innings, with Delany smashing four consecutive sixes off Hayden Walsh Jr - the first hit the upper deck of the grandstand straight down the ground, while the second six cleared the stand and landed outside the ground.

With the tempo increasing over-by-over, Ireland then lost 7-52 from the last 9 overs with much of the damage caused by the bowling of Pollard (4-25) - his best figures in T20I cricket. The big Trinidadian bowled with variation and guile, showing his bowlers a masterclass in how to use changes of pace and angle to great effect.

Harry Tector (31) kept the run rate ticking over while wickets fell, but a second lengthy rain delay during the latter overs stymied any momentum Ireland were building. This delay came with 9 balls in the innings to go, and when play resumed an over had been lost, leaving Ireland with just three balls left.

It could only be described as a chaotic last three balls with three wickets falling - including two run outs - with Ireland scrambling for late runs. Their final score of 147-9 from 19 overs looked distinctly below par and would require early wickets to build pressure.

The innings break brought two pieces of news - that the DLS-adjusted target for the West Indies was 152 from 19 overs, and Balbirnie had suffered a hamstring-strain during his innings and would not field.

With Stirling deputising as on-field captain, he made a surprise decision to bowl himself in the first over - and the tactic worked, with Stirling taking the wicket of Lendl Simmons from the fifth ball.

At 16-1 in the third over, a third major rain delay arrived and this time ended the match - leaving the series 1-0 in Ireland’s favour, with one game to play.

The last game of the three-match T20I series will be on Sunday January 19th January 2020, starting at 10pm (GMT) at St. Kitts and Nevis. For fans in Ireland and the UK, the match will be televised on Sky Sports Cricket channel.

1 TV View: Roy Keane but Daragh’s keener as Late Late fails to shoot the lights out
2 Ireland Slam England at the Gardens to open up Grand ambitions
3 Six Nations: Ireland v England all you need to know guide
4 ‘Manchester United are lucky to have you’: Klopp responds to Donegal schoolboy’s letter
5 Iain Henderson ruled out of Ireland’s Twickenham visit
Real news has value SUBSCRIBE