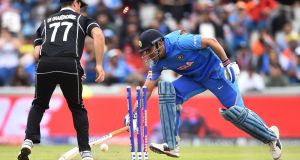 MS Dhoni of India is run out by Martin Guptill of New Zealand during the semi-final of the ICC Cricket World Cup. Photo: Nathan Stirk/Getty Images

Just before 3pm, deep into the second afternoon, this epic semi-final finally finished in a startling 18-run victory for New Zealand. In the end, the margin between the teams was even tighter than that, no wider than the single inch between the tip of MS Dhoni’s bat and the crease when he was run out by a direct hit from Martin Guptill. India needed 24 off nine balls at that point, and Dhoni, who was had made fifty from 72, was their last, best hope of getting them. The crowd, ear-splittingly loud, fell awful quite then, as the truth sunk in that New Zealand had won through to the World Cup final.

Only hours earlier, it had seemed a desperately unlikely result. CricViz’s win predictor tool gave New Zealand a 2 per cent chance of winning at the start of the second innings. 211 for five overnight, they had cobbled together 28 runs from the 23 balls left over in their innings from the previous evening. They were stymied by the brilliant fielding of Ravi Jadeja, who helped dismiss both their not-out batsmen. He ran out Ross Taylor with a 35-yard throw from mid-wicket, and caught Tom Latham with a leap on the boundary. Brilliant as those wickets were, Jadeja was even better again with the bat, when he nearly won India the match.

India needed 240, then, and they had had all night to figure out exactly how to go about it on this tricky, sticky, two-paced puzzle of a pitch. But New Zealand had obviously been doing some plotting too. Kane Williamson’s field for their opening batsmen was not a cordon but a noose, with eight men standing well inside the 30-yard circle, two of them at slip, two more at short mid-wicket. New Zealand might have reflected, too, on a one-day game between these teams at Hamilton six months back, when the ball had been swinging, and Trent Boult had bowled India out for 92.

Rohit Sharma went first, caught behind off a perfect delivery from Matt Henry, just full enough to make him play even as it was moving away. In came Kohli. You could sense how tense he was. He edged one low to slip, threw his bat in a loose drive at another. Then Boult got him with an inswinger. Kohli thrust his bat at it, and the ball curved back in and hit him high on the knee. As Richard Illingworth raised his finger, Kohli reeled back in shock, so aghast it looked the umpire had dropped a priceless vase. Kohli reviewed it, and the replay showed the ball would have just caught the top of the bails.

Three balls later KL Rahul was caught in two minds about whether to play a delivery from Henry and he, too, sliced a catch through to Latham. So India were five for three. And for the first time in the history of international cricket, all the first three batsmen in an innings had been dismissed for a single run each, which is a new variation on the old curse of Nelson. And it meant India were faced with a new problem, one they had not met in the tournament yet.

Now their middle-order had to cover for them. Dinesh Karthik was already struggling. Henry got him. Or rather, Jimmy Neesham did, with an astonishing catch at backward point, diving down, one-handed, wrong-handed, to take the ball just before it hit the grass. Now India were 23 for four, and their two swaggering young batsmen, Rishabh Pant and Hardik Pandya, set about trying to rebuild the innings.

In the end, neither could resist the temptation, the devilish invitation, to try and do something spectacular. Pant went first, trying to wallop Mitch Santner for six, then Pandya followed in exactly the same way.

At that point Santner, plugging away from around the wicket, had bowled six overs, and taken two for seven. India needed 148 from 19 overs, now, but in many ways the game was only just beginning. Dhoni, the old master, was embedded at one end, and Jadeja was at the other. They were the perfect pair for the situation.

Dhoni played so carefully he might have been carrying a clipboard and a risk assessment form, but he seemed supremely confident, all the while, that he knew exactly what he had to do. He has done these sums before, and seldom got them wrong. At the other end, Jadeja, full of fire and fury after his argument with the Indian pundit Sanjay Manjrekar, who had disparaged him as a “bits and pieces player”, gathered up Dhoni’s slack, and started picking off sixes down the ground. Together they wrestled back the match with a 116-run partnership.

They needed 42 runs from the last four overs when Jadeja, on 77, finally missed one of those big hits, and was caught by Williamson.

So it all came down to Dhoni. And he nearly did it too. He had just crashed his first six, an uppercut that whizzed over Santner’s fingertips at deep point, when he made his first real mistake. It was only a minor one, a momentary hesitation, over whether or not to try for the second run his partner had called for, but in a match of such fine margins, it was fatal. Guptill’s throw beat him home. He was out, and India were too. – Guardian

1 Gerry Thornley: After 32 weeks the Six Nations is back up for grabs
2 Stockdale and Ringrose on board with expansive Irish game plan
3 Allianz Football League permutations: Who needs what?
4 Bennett girding his loins for impossibly unpredictable Vuelta
5 GAA expected to go ahead with championship under Level 5
Real news has value SUBSCRIBE