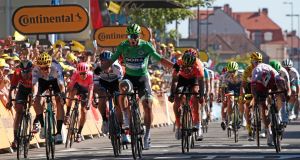 Peter Sagan described his 12th Tour de France stage win in Colmar as “exquisite” after the first day of racing through the Vosges Massif failed to induce any major attacks from the contenders for overall victory in Paris.

A day that featured four categorised climbs in the “highest Tour in history” produced a stalemate among the major favourites. The 175.5 kilometre loop through the Vosges’ easier climbs merely continued the waiting game, with all minds now focussed on Thursday’s first summit finish to La Planche des Belles Filles.

As Sagan tightened his hold on yet another green jersey, Geraint Thomas, Egan Bernal and Adam Yates , all cited as contenders for victory on the new and steeper finish to a climb that has been used only three times in the Tour, fretted over what lay in wait at the spectacular ‘Bench of the Beautiful Girls.’

Even on Wednesday evening there was uncertainty over the difficulty of the stage six finish, which includes a new final kilometre that is both murderously steep and on gravel road. Just how rough the gravel is and whether it has been improved by the race organisation remained a mystery, even at the 11th hour, with most team’s sports directors heading straight from the stage five finish in Colmar to La Planche des Belles Filles to see for themselves.

“If you look back at previous stages at Planche des Belles Filles, they’ve always been hard days, but this time the riders will be going significantly higher and the amount of climbing means that this is like a full-on mountain stage,” Thomas and Bernal’s Team Ineos sports director, Nicolas Portal said.

“The final kilometre makes it much more difficult because it’s very steep on a road that’s far from perfect. There’s gravel and, unless it’s been resurfaced, it’s going to make things a lot more difficult. It’s quite technical as well because it’s not simply a steep climb at the same gradient. There are easier sections, then very difficult parts.

But Portal doubted that the climb would prove decisive. “I think it is coming too soon to make a real difference,” the Frenchman said. “The riders know that, but they also know that the first mountain stage can sometimes be hard on the legs, particularly one like this when the terrain is quite punchy, and if they can’t respond in the way that they want to they can lose time. I think some of the riders will be a little bit nervous, feeling that if the stage doesn’t go well for them it will be catastrophic.”

Defending champion Thomas, who lost five seconds to teammate Bernal at Monday’s finish in Epernay, appreciated entering the first Tour climbs. “It was nice to get a bit of climbing in the legs,” he said. “You can’t really tell a lot from the last few days.”

“It is hard,” he said of the stage six finish. “That sort of climb favours the punchy, pure climbers,” he said, before citing Bernal among the favourites. The question now is, whether, after a difficult build-up to the Tour, Thomas has the legs to stay with them.

There was little movement for the two Irish riders in general classification as Dan Martin rose one place to 35th, still one minute and 28 seconds behind leader Julian Alaphilippe while Nicolas Roche slipped to 20th, one minute behind the leader. – Guardian