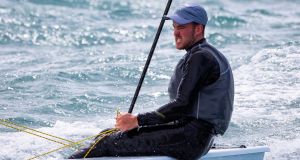 In a disappointing outcome to the Laser World Championship in Sakaiminato, Japan, Ireland failed to gain a place for the Tokyo 2020 Olympics following another lacklustre day by the lead Irish contender, Finn Lynch from Carlow.

Finishing 40th overall in the 52-boat Gold fleet, Lynch had a better result in Aarhus, Denmark, last summer at the World Sailing Championships when the first 14 nation places were awarded. Five more nations won places in Japan this week, but Lynch’s result was six nations shy of achieving the qualification.

A further two places will be awarded to European nations next April at the World Cup of Sailing event in Genoa, Italy.

The series was won by Australia’s Tom Burton, who followed the fleet around the course in the final race and the only leader assured of a podium result, with no fewer than three tied places in the top 10 for the 12th and final race.

Australia, New Zealand and Britain dominated the top 10, along with a finisher from France and Germany apiece.

Irish Sailing will undertake a detailed review of the event ahead of next month’s test event at the Tokyo regatta venue.

In addition to Lynch as the Rio 2016 veteran on the men’s squad, Ewan McMahon placed 51st overall, with his Gold fleet performance a highlight of his emerging programme.

Liam Glynn ended in 95th overall in the Silver fleet, a step-up from his previous form in the Bronze for the lower-third competitors.