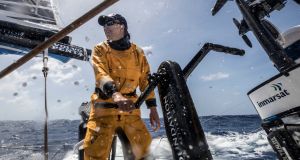 The good news is that Turn the Tide on Plastic is currently ranked third overall and we’ve worked really to get here over the past two weeks.

Well, not quite. About half a knot to be exact so more like really slow.

But we’re moving and in this nip and tuck game that still counts as we try to shake off the effects of the Doldrum-like conditions of next to no wind after several days of fast sailing.

We have had numerous position reports where we are the fastest boat. Reaching in the Volvo 65 is a wet experience and I think up until yesterday I just spent my time being wet.

I got to the stage where I didn’t bother to take my wet outer top off before going to bed as I was tired and its worse putting a wet top back on when I get woken up!

The good news is that Turn the Tide on Plastic is currently ranked third overall and we’ve worked really to get here over the past two weeks. We have 1,500 nautical miles to sail in this sixth leg and anything can still happen.

The six-boat fleet has split into three groups. The Scallywags and AkzoNobel took a more Westerly routing that really paid off for them with almost 200 miles of a lead at one stage before the breeze turned light for them and the rest of the boats made gains.

These two are neck and neck in first and second places but with a much-reduced advantage.

Overall race leaders Mapfre took a more Easterly route and were covered by contenders Dongfeng but both are the back-markers for now.

In the middle of these two groups are ourselves and Team Brunel.

It’s funny, after racing almost 3,500 miles, we’ve both closed on one another by a couple of miles and we’re constantly in sight of one another, even going boat on boat in a tacking duel to become the lead boat.

We came within 50 metres of each other a few times but now we’ve managed to edge ahead which is a great morale boost.

But now that the whole fleet is in a giant patch of very light airs, the question becomes who will be first to reach the new breeze expected over the next 24 hours?

We’re about midway between the Solomon Islands and Vanuatu, heading south for New Zealand and this could become the deciding play for this leg.

It’s tempting to wonder whether we could hold third place, maybe even improve on it and deliver our first podium result for the race but with potentially a week of sailing to go before we reach Auckland it’s too soon to speculate.

Still, the highlight of the last week was catching back up to the front-runners plus having Brunel within sight. I love racing and it’s much easier to be in race mode when you can see who you are chasing.

For this leg I have been on watch with Dee [Caffari] our skipper for the first time in the race which is good as we get on well and both want to make the boat go as fast as possible.

We call her the upwind expert as she raced solo around the world the wrong way (against the prevailing winds)! This is actually her sixth time racing around the world, so she’s not lacking in any offshore experience.

Also this leg, I’m on a slightly different watch rotation this so I now get to spend the first half of my watch with Henry and Lucas, both predominantly offshore sailors and the second half of my watch with Francesca and Bernardo who are friends from Olympic sailing. I did quite a bit of training with Francesca in the Laser Radial before she moved to the 49er skiff and just last month I found pictures of Bernardo and myself at the London Olympics opening ceremony.

I am on opposite watch to our boat captain Liz (this is her third Volvo race) and Bianca, our Kiwi on-board who is definitely the most excited person about arriving into Auckland in a weeks’ time.

I think it is probably really special to sail into your home country particularly after such a long hard leg. I would have loved if the race still stopped in Galway as arriving into Ireland would be pretty amazing. I’ll just have to make do with Cardiff in June and then hope as we race up the Irish Sea some supporters might come out to watch us race by.

I’m still pretty disorientated as when we left Hong Kong, Dee and I sailed two of our watches in the dark and only one watch during the day, while as we travel East and South that has changed to nearly two day watches and only one at night.

Night watches are always harder as your body keeps telling you that it’s time to sleep as its dark.

Last Sunday night was our first night of clear starry skies while every night before that was pitch black with a lot of cloud cover and no moon.

Meanwhile, I actually only brought one bag of Tayto with me in the end as I was tight on space in my personal kit bag and was slightly terrified they would explode and I would have clothes that smelt like cheese and onion crisps for three weeks so I had my bag the other day and it was great!

I didn’t share them which I felt slightly guilty about though not as guilty as when I ate most of the chocolate bar that is meant to be shared! I tried to justify it as I hadn’t eaten any chocolate until Sunday, but then I really couldn’t help myself . . .

The Fulfil bars are still going down well too!