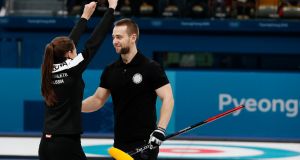 Alexander Krushelnitsky won a bronze medal with his wife Anastasia Bryzgalova in the mixed doubles curling at the 2018 Winter Olympics in Pyeongchang. Photo: Cathal McNaughton/Reuters

A criminal investigation has been opened into the circumstances which saw Winter Olympics medal-winning Russian curler Alexander Krushelnitsky test positive for meldonium, the Olympic Athletes from Russia team has announced.

The Court of Arbitration for Sport’s anti-doping division opened a procedure against Krushelnitsky, who won mixed doubles bronze with his wife Anastasia Bryzgalova, on Monday and his B sample was also positive.

The OAR delegation released a statement on Tuesday evening to say “the circumstances of the case, do not provide any answers to the questions as to how and when meldonium could have gotten into the athlete’s body”.

For meldonium, which increases blood flow, to be performance-enhancing it must be used on a regular basis and over a prolonged period of time, the OAR statement added.

And the OAR said Krushelnitsky provided a clear drug sample on January 22nd.

The statement added: “According to the unbiased results of laboratory analysis of Alexander Krushelnitsky’s samples detected concentration of the substance can be indicative of taking it once, which is not applied in medical practice and is absolutely useless and ineffective in the context of enhancing physical performance or sports results.

“No evidence of the systematic usage of meldonium is available in this particular case.

“Therefore, the ROC has initiated a comprehensive investigation of the circumstances which also includes the criminal investigation under the RF (Russian Federation) criminal law to establish the facts of the case in detail.”

Meldonium was found to be used by more than 100 Russian athletes in 2016.

Former world tennis number one Maria Sharapova served a 15-month ban for using the substance after it was added to the World Anti-Doping Agency’s prohibited list.

The positive test will ignite further debate about the involvement of Russian athletes at the Games.

The ROC is under suspension by the International Olympic Committee following the systemic doping at the Sochi 2014 Olympics.

The IOC in December determined that Russian athletes who proved they were clean would be allowed to compete as neutrals in the Games, in a team named the Olympic Athletes of Russia.

The OAR are competing under the Olympic flag and the Olympic anthem is being played at any medal ceremonies they feature in.

There are 168 athletes competing in the OAR team, who have so far won 11 medals, three silvers and eight bronzes — one of them won by Krushelnitsky and Bryzgalova in the first Olympic mixed doubles curling tournament.

The OAR statement expressed “sincere regret over the fact of the incident”.

It added: “We also wish to stress that great efforts have been taken in Russia recently in close cooperation with the WADA and the IOC to create a fundamentally new anti-doping system.

“Our athletes provide doping samples on a regular basis and much more often than athletes from other countries.

“Under these circumstances, positive samples, like in this case, are of an outstanding, individual nature.

“We fully share and support the WADA and the IOC’s zero tolerance attitude to doping and take all the required measures so that the offenders bear the utmost responsibility for that.

“That’s why we are committed to carry out the aforementioned investigation and to find the actual reasons of this doping case.”

Earlier on Tuesday CAS’ ADD announced a third anti-doping procedure of the Games.

Slovenian ice hockey player Ziga Jeglic was found to have taken fenoterol, which opens up the airways to the lungs, in an in-competition test, CAS’ ADD said, and has been thrown out of the Games.