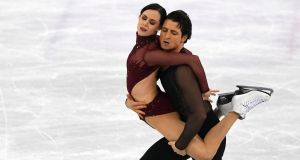 Tessa Virtue and Scott Moir of Canada compete during the free dance portion of the ice dance event as they claimed the golf medal. Photograph: James Hill/New York Times

Canadian ice dancers Tessa Virtue and Scott Moir claimed their second Olympic gold medal with a brilliant free dance on Tuesday, edging to the top of the podium by less than a point and breaking the world record into the bargain.

Skating last to Moulin Rouge the pair embraced and grinned on the ice after their dynamic performance that had the audience roaring.

They won with a total score of 206.07, eclipsing the world record that had been set just moments before by French pair Gabriella Papadakis and Guillaume Cizeron, who finished on 205.28.

“We don’t know what the future holds quite yet but it definitely feels like we’re getting close to the end of our career,” Moir told OBS, the official Olympics broadcaster.

The pair had previously said this would be their last Olympics and hinted that retirement from competition – this time for good – might be on the cards soon.

“We’re just proud of our accomplishments at these Games. The goal was to win two golds but it’s a really intense competition,” Moir added.

“We have such respect especially for Gabriella and Guillaume. We’re pretty happy with how things turned out, that’s for sure.”

The Canadian pair, who won gold in Vancouver eight years ago, have dominated the event since they returned to competition after retiring following a silver at the Sochi Games four years ago. They also have a team silver from Sochi and gold at Pyeongchang, won last week.

They made a comeback late in 2016 and powered to a number of world records with only one defeat along the way.

That loss – in the Grand Prix Final in Japan last December – was to Papadakis and Cizeron, and prompted the fiercely-competitive Canadians to return home and tweak their programme in response.

Papadakis and Cizeron struggled in their short programme on Monday after the top of Papadakis’s costume came loose, and were 1.74 points behind the Canadians entering Tuesday’s free dance.

The pair’s ethereal free dance had the audience at the Gangneung Ice Arena clapping and set a new world record for both the free skate – they scored 123.35 and topped the Canadians – and the total score.

Virtue and Moir broke that record fewer than 15 minutes later, when they scored 122.40 in the free programme.

Papadakis said Tuesday’s performance had made their Olympic debut special.

“Today we did something we never thought we could do. We’ve never skated that way before,” she told a news conference.

“To do that in our first Olympics is really something that we’re proud of.”

Earlier, when asked if she had taken special steps to avoid any more costume problems, she laughed and told reporters, “Yeah, we made sure.”

American siblings Maia and Alex Shibutani, known as the “Shib Sibs”, won bronze after entering the free dance in fourth. They finished on 192.59.

“I am so proud of what we accomplished,” Maia told reporters.

“To have four skates on Olympic ice that we can be extremely proud of and to come away with two Olympic medals for Team USA and ourselves and everyone that has supported us, it’s almost indescribable.”

“It was amazing to finally have that Olympic moment because four years ago in Sochi we left with a lot of experience, but still yearning to have that really special moment on Olympic ice that we’ve grown up watching.”

1 Record numbers of adults in Ireland participating in sport and walking
2 Munster braced for worst of financial crisis due to Thomond Park debt
3 European clubs must take lessons from financial demise of former greats
4 When the action stops, sports photographers think outside the box
5 Gerry Thornley: Home and away Six Nations could be its ruination
Real news has value SUBSCRIBE