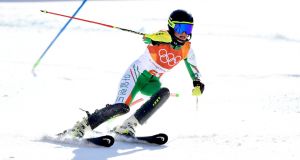 Tess Arbez in action during the Slalom. Photograph: Ramsey Cardy/Sportsfile

Arbez came 50th in Thursday’s Giant Slalom - her preferred event - and the 20-year-old impressed as she followed that up with a 46th place finish in the Slalom.

McMillan meanwhile added to his 52nd place finish in the Downhill by coming 48th in the Super-G - an event 14 of the field failed to finish, including American star Ted Ligety.

Arbez was competing on the longest slalom course she had experienced, and she recorded a combined time of 1.58.47 over her two runs.

This left her 20 seconds behind Swedish gold medallist Frida Handsotter, and Arbez was pleased with her efforts: “I’m really happy about another top 50. I know that for top 40 I will have to be faster the next time but I’m really happy with this.

“I think it’s really good to finish, not just to be here to do two gates and go out. I hope it will help the girls to know that we exist and to know that a lot of girls can race here, that we can race in Ireland,” she said.

Meanwhile McMillan suggested he could have done better than his 48th place, which he secured in a time of 1.33.54: “I felt very good but I had a mistake before going into the Dragon Valley, the flat part, which meant I lost all my speed. That meant I was slower than I’d hoped but I felt I skied the top section very well.

“I wanted to do a little bit better but I guess I have to be happy with how everything went and come back stronger the next time. The future looks very bright for Irish skiing and I’m more motivated than ever to keep on going.

“I’ve had a taste of what it’s like now and I need to come and do it again and make a result that really stands out. Four years and eight years from now I have high hopes.”

Elsewhere Ireland’s only cross-country skier in PyeongChang, Thomas Westgaard, finished 63rd in the 15km Free in a time of 37m.36s.

The race had a huge field of 115 athletes, speaking after the event Westgaard said: “I have to be satisfied because it was one of my best skate races this season. It was a tough start but I grew into it. I was ranked 76th and finished 63rd so I jumped 13 places in the ranking and I’m very pleased with that.”

Westgaard still has his best event, the 50km Classic, to come on Sunday, 24th February