Rivals had questioned legality of British suits ahead of skeleton competition 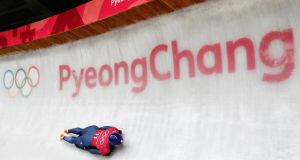 Great Britain’s skinsuits have been given official approval on the eve of the Winter Olympics skeleton competition after their legality was questioned by rivals on Wednesday.

Rival competitors have raised objections to Britain’s innovative equipment, though, in particular the skinsuit technology which has been previously used by British Cycling.

However, a statement from the International Bobsleigh and Skeleton Federation said: “The IBSF currently checked race suits of the British skeleton team. There were no rule violations at the presented suits.”

The issue was raised at the IBSF captains’ meeting on Wednesday evening, prior to the two-day men’s competition beginning on Thursday. The women’s event starts a day later and concludes on Saturday.

A former world champion suggested Britain flout the rules at Olympics, but Team GB insisted it abided by all regulations.

United States’ Katie Uhlaender, the 2012 world champion, said: “A lot of athletes and coaches have questioned about whether the suit was legal.

“I think this has been a question posed of Great Britain in the last two Olympics, starting in 2010 with Amy Williams and her helmet and suit.”

A Team GB spokesperson said: “We are confident that all competition equipment meets the technical and commercial requirements for every sport and discipline.

“We do not comment on specific technical aspects of equipment prior to competition.”

Uhlaender referred to the helmet Williams used in Vancouver, which was subject of an unsuccessful protest after the competition had concluded.

The American, who could be promoted to Sochi 2014 bronze behind Yarnold after the disqualification of Russia’s Elena Nikitina, admitted questioning rivals’ equipment was a necessary part of preparations.

“It’s the part game. If you see something that is questionable then it’s OK to ask,” Uhlaender added.

“The rules state that everyone is supposed to have access to the same equipment as far as helmets and speed suits go and not have any aerodynamic attachments on the helmet or suit.

“I would rather ask the question now than during the race, just get it out of the way and make sure everyone’s on the same playing field.”

US Bobsled and Skeleton chief executive Darrin Steele suggested the timing of the skinsuits story could be part of the mind games of competition.

“A large part of this sport is mental strength,” Steele said. “The timing of the article was perfect and a smart strategic move.”

There is a far greater number of variables at a sliding track than inside a velodrome, but aerodynamic advantages from skinsuits can still make a difference.

The track is exposed to the elements, with biting winds and light snowfall a factor in Pyeongchang, while sliders also must wear a numbered bib over their skinsuit.

Yarnold and Deas are finding form at the right time.

From six runs and three days of training, Deas has finished first two times and Yarnold once.

They have been outside the podium places five times altogether, with Yarnold finishing fourth and sixth and Deas twice finishing seventh and once fourth.

The 29-year-old is aiming to become the first Briton to win successive Olympic gold medals and she reckons she is well suited to the intensity of the Olympics.

Britain have won skeleton medals at the last four Olympics and Deas is convinced she can add to the honours board.

“We’ve done it before and it just adds to the belief that we can do it again,” she said.

Dom Parsons performed so well in training on Monday and Tuesday, placing first twice, that the Briton opted to take the day off on Wednesday ahead of Thursday’s opening day of competition.