‘This has been unreal. For the rest of my life I’m an Olympian’ 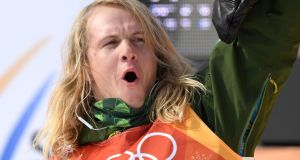 Brendan ‘Bubba’ Newby, the first Irish half-pipe skier in the history of the Winter Olympics, was just one place off qualifying for the final at the half-way point of his qualifying group in PyeongChang on Tuesday.

But a fall after the second trick of his second run meant the 21-year-old freestyler could not improve on his first round score of 53.80 which eventually earned him 22nd from a field of 27 skiers on his Olympic debut.

“It’s insane to be Ireland’s first every freestyle skier and first ever half-piper,” he said. “I didn’t think that would ever happen! After my run I had a few kids message me on Instagram, now that it has happened I don’t want to be the last (Irish) freestyle skier. I want to get more people on the team, I want to get more people skiing for Ireland and get more people involved in what I love. This is the most fun thing you could ever do,” he enthused. “I hope I made it look like I was having a good time because I was!”

“This has been unreal. For the rest of my life I’m an Olympian. That’s something I’ve wanted my entire life so for it to actually happen – I can’t even put it into words!On the second run I just popped a little too hard. If you pop too hard on a half-pipe you kind of fall out of the sky pretty far and I just couldn’t hold onto it. My hips were behind my feet (on landing) and when you’re there it’s a pretty tough position to get out,” he explained.

“My first run was good. I was just going out there fired up to go big and it worked. I had one more trick that I wanted to put down in my second run. It was just about improving. I didn’t even know what place I was after the first run, I’ve only just found that out,” he admitted.

Brendan revealed that he had used a special technique to prepare him mentally: “Our Irish team slogan out here is ‘dinna (dinner) time!’ I was just yelling that out loud because the more you can distract your brain from thinking about it and getting in your head the easier it is! So (at the start) I just distracted myself with my good friend and coach Corey (Jackson) and Seamus (O’Connor), they were just helping to stoke me out.”

To have made the final, Newby needed to finish in the top 12 and the 12th man scored 68.60 points. Americans filled the top three qualifying spots and they didn’t even include USA’s reigning Olympic champion David Wise who was only in eighth place with 79.60.

Newby was born in Cork when his father Van was working in UCC 20 years ago as a guest professor of economics and he has grown up in Utah, USA. Asked about the possibility of now becoming a two-time Olympian in 2022 he said: “I’d love to do another four years but I don’t look that far ahead though personally. My next goal is the World Championships in 2019. They’re in Park City (Utah), close to where I live, so it’s going to be a fun contest and that’s my next goal.”

Ireland has one more skier in action in PyeongChang. Thomas Westgaard-Maloney will compete in the 50km Class mass start cross-country race on Saturday, February 24th.