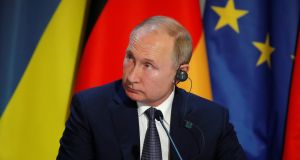 Russian president Vladimir Putin has said his country have ‘reason to appeal’ against the four-year ban imposed by the World Anti-Doping Agency.

Wada’s executive committee unanimously accepted a recommendation from its independent compliance review committee on Monday to impose sanctions on Russia.

They include barring teams under a Russian flag from competing at the Olympic and Paralympic Games of 2020 and 2022 and the football World Cup in 2022, among other global sporting events.

The country would also be blocked from hosting international sporting competitions. Individual athletes may be able to compete in events if they can prove they are not implicated or affected by the manipulated laboratory data which led to the sanctions being imposed.

Russia has 21 days to respond to the proposed sanctions, and the most powerful man in the country has already indicated an appeal will be lodged.

Putin told the TASS news agency: “We have all the reasons to file an appeal to CAS (the Court of Arbitration for Sport).

“There are other considerations as well, but it is important that this issue is analysed by specialists, lawyers who would talk with our partners having this knowledge.”

The sanctions relate to tampering with data obtained from the Moscow laboratory in 2019. Investigators from Wada found that some of the deletion and manipulation occurred after Russia had been reinstated to compliance in September 2018, having initially been banned in 2015.

Putin said he did not agree with collective punishment, adding: “The main thing, in my opinion, and it seems to me that everyone agrees with it, is that any punishment — since the times of Roman law — should be individual and based on what that individual did.

“Punishment cannot be collective and affect those people who have nothing to do with certain violations.

“I think that Wada specialists understand this as well. If some of them make such decisions on collective punishment, then it seems to me that there are grounds to believe that (it is) not care for clean global sports is behind this, but rather political considerations that have nothing to do with the interests of sports and the Olympic movement.”

Russia will still be able to compete at Euro 2020 next summer, and St Petersburg can stage matches, as the European Championship is not a global competition. It is run by Uefa rather than Fifa.

In her speech to Monday’s Wada meeting in Lausanne, Wada vice-president Linda Helleland made it clear that in her view the sanctions did not go far enough.

“I would have liked to see the consequences to be even tougher than put forward by the CRC,” she said.

“I would have preferred to support a blanket ban. A blanket ban can make the Russian leadership realise the seriousness of the mess they have created — for themselves and for their athletes.”

The chief executive of the United States Anti-Doping Agency Travis Tygart branded Wada’s punishment as “yet another devastating blow to clean athletes, the integrity of sport and the rule of law” and called for “a revolt against this broken system to force reform”.

1 Six Nations: Ireland are contenders but England still the team to beat
2 Owen Doyle: Creeping professionalism of schools rugby a threat to the game
3 Mike Catt hopes to have Irish backs purring in Six Nations
4 In Donegal Michael Murphy is seen, simply, as a godsend
5 The world spins but it’s soon back to Dublin and Kerry
Real news has value SUBSCRIBE