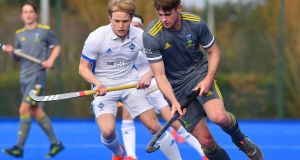 UCD inflicted a first cup defeat on Three Rock Rovers since February 2017, ending a remarkable run of 34 successive victories for the Rathfarnham club.

Michael Styles’ student side held on for a 3-2 success in the Irish Senior Cup quarter-finals at Belfield, a brilliant first half performance laying the base for the result.

Andrew Meates put them in front in glorious fashion, his deflection hitting the top corner from Jazze Henry’s reverse-stick cross. Iain Styles added the next two for a commanding 3-0 lead at the big break and seemingly set fair.

Rovers, though dominated the second half and were back in the mix courtesy of third quarter efforts from Ross Canning and James Walker, setting up a tense final quarter.

UCD held on, however, with Max Maguire making a string of awesome stops while Ziggy Agnew made some big last-ditch tackles. Canning was denied from a penalty stroke for a potential equaliser and UCD went through to the semi-final and a shot at a first ever Senior Cup final appearance.

In the semis, UCD will meet Cookstown after the Ulster Premier side stunned Pembroke 3-2. The top tier Dubliners seemed to be cruising at 2-0 at half-time thanks to Alan Sothern and Jack Ryan goals.

He emerged from the sin-bin to net the 2-2 goal but missed a stroke soon after. Atoning for that, Haycock made some heroic defensive interventions, keeping his side level long enough before Scott McCabe nicked in with a 68th minute winner.

The other side of the draw saw Glenanne get the best of Monkstown 2-0, overturning a heavy league defeat against the same opposition.

Johnny McCormack put the Glens 1-0 up in the second quarter before Shannon Boucher made the game safe at the start of the final stanza.

Their opponent will be Lisnagarvey who had far too much in the tank for Munster Division One side Cork C of I, 5-0. Daniel Nelson, Andy Williamson and Troy Chambers had them well clear by the big break to keep the visitors at bay.