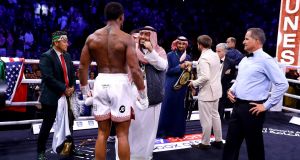 As Saturday night spilled into Sunday morning in Saudi Arabia, something unusual happens. The shrieking bass line of House of Pain’s Jump Around starts pumping out across the Diriyah stadium, where Anthony Joshua’s heavyweight showdown against Andy Ruiz Jr is about to begin. A few people stand up. Then several more. And suddenly hundreds of men and women in traditional dress are pogoing and waving their hands in delirium.

This, to put it mildly, is not something one expects to see in a country that is a byword for patriarchy and religious extremism. But when I speak to one local, he tells me this is another sign of the dizzying change of the past two years. “Although I agree a lot of bad things are still happening, it is improving,” he says. “In 10 years’ time we won’t be living in the same place.”

The heir to the Saudi throne, Mohammad bin Salman, watches the fight on a private terrace. And afterwards Joshua takes care to thank his team, his opponent – and then, gazing upwards to Salman, gives him a fist-pump. The crown prince responds with a pump of his own.

But here is a more sober story, also from last week. A female friend from Britain wants a swim, only to be told that her hotel pool is exclusively for men, except between 7pm and 8pm. Most gyms, meanwhile, are out of bounds for women. Then there is the recent Human Rights Watch report detailing another side of Saudi Arabia, including mass arrests and detention, a crackdown on dissent and free speech and jailing of the country’s most prominent women’s rights advocates, including Loujain al-Hathloul, who called for women to be able to drive.

And that is before we get to the beheadings, or the murder by a 15-man Saudi hit squad of the prominent critic Jamal Khashoggi , who was probably drugged and asphyxiated, then dismembered and stuffed into bags last year. The winds of change are blowing in Saudi Arabia. The trick is trying to decipher in which direction.

Sport is a growing part of this, of course. Soon the Spanish Super Cup between Barcelona, Real Madrid, Atlético Madrid and Valencia will take place in Jeddah, with the clubs splitting around €40m. In February the Saudi Cup will become the world’s richest horse race with prize money of €18m. Many more events are in the pipeline.

Of course the Saudis are doing this partly to sportswash their dubious rights record. It would be foolish to suggest otherwise. But locals and foreigners working here insist it is true that the regime’s Vision 2030 plan has led to significant if modest changes, including more women doing sport, being allowed to drive and leave the country without their guardian’s permission.

True, a pungent whiff of misogyny remains. Most women still feel compelled to wear long black abaya robes or the burka in public and may train only in female-only gyms. But socially things do seem different from in 2016, when 6,000 Saudi women responded to New York Times to outline their frustrations.

The response of one 24-year-old woman was typical. “We’re not allowed to even go to the supermarket without permission or a companion, and that’s a simple thing on the huge, horrendous list of rules we have to follow,” she wrote. Another was just as blunt. “The male guardianship makes my life like a hell!! We want to hang out with our friends, go and have lunch outside. I feel hopeless.”

When it comes to other freedoms, including political expression, the voices I speak to are less optimistic. Last week when I asked the Saudi sports minister, Abdulaziz bin Turki Al Faisal, about Amnesty International’s criticisms, he replied: “We don’t want to impose anything we can get a backlash from, that could reflect negatively around us. But change is happening and it will come.”

I doubt if I could have asked such a question if I was a Saudi. After all, the regime has arrested several journalists in the past month.

Another local I spoke to hoped that the lack of free speech was being used to control not only voices for democracy but powerful conservative clerics kicking up a fuss about the reforms. “Eventually they will have to create institutions that can govern apart from the royal family,” he continued, his voice carrying more hope than expectation.

For now, though, the best sport can do is shout about the issues whenever it visits countries like Saudi Arabia and China. As Human Rights Watch puts it: “Increased pressure from fans and consumers would also raise the bar for human rights.”

In January more than a dozen women drivers will take part in the Dakar Rally. Any journalist present should be questioning why Saudi women’s rights activists who fought for the right to drive in Saudi Arabia remain banned from travel, on trial or behind bars.

And when it comes to sportswashing, Human Rights Watch also has some salient advice. “Instead of using sports to rehabilitate its global image, it would be cheaper and easier for Saudi Arabia to simply undertake fundamental human rights reforms and respect the basic rights of its citizens in order to improve its image and standing in the world.”

Whatever you made of Joshua v Ruiz II coming to Diriyah, it is surely impossible to argue with that. – Guardian