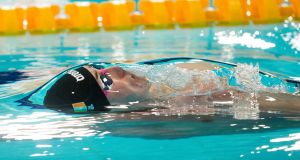 Shane Ryan took Ireland’s second bronze medal of the week in the men’s 50 metres backstroke on the final day of competition at the European Short Course (SC) Championships in Glasgow.

The 25-year-old, the world SC bronze medallist in 2018, snatched the bronze in a blanket finish behind Russia’s rising star Kliment Kolesnikov and the German Christian Diener.

Ryan, was the third-fastest qualifier into the last 16 in the morning’s heats and a time of 23.21 was enough for Ryan to take second place in his semi-final guaranteeing his place in the last eight.

There was a thrilling finish to the two-lap decider but Ryan did just enough to get ahead of Robert Andrei Glinta of Romania to claim Ireland’s second bronze to add to Mona McSharry’s 50 breastroke third place. Brendan Hyland reached his first major international final making the decider in his main event, the men’s 200 metre butterfly.

Hyland (25) was placed ninth after the heats, having recorded a time of 1.53.79 but as there were three Russian swimmers ahead of him; the third of those Alexander Pribytok has to drop out as only two swimmers per country is allowed.

Thus Hyland was elevated to eighth place, earning his place in the final where the extertions of the week probably caught up with the Dubliner as he finished last in 1.55.06 in a race won by Andreas Vazaios of Greece.

Larnes Hill has been in good form this week, breaking Irish records in the 50 and 100 backstoke and she make her third last 16 in the women’s 50 freestyle, breaking her own Irish record by almost a quarter of a second in 24.76 seconds.

In the semi-final Hill produced yet another Irish record time of 24.44 seconds and was classified ninth, just missing the final by three-tenths of a second

Ireland’s women’s medley four also broke the Irish record by almost four seconds in 1.49.31 and were placed 10th, two off making the final.