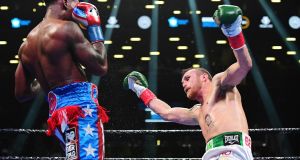 Having tasted world title defeat in controversial circumstances eight months ago, Hogan moved up in weight to headline Showtime’s main event against the undefeated “Hitman,” but was no match for his overwhelming size, power and strength.

The Australia-based 34-year-old began lively and a hard left hook in the opener was the highlight of an evenly matched two round salvo.

Still, Hogan was finding it hard to penetrate the six foot Texan’s clear height and reach advantage, who soon began discovering his range.

12 seconds into round four Hogan found himself on the canvas for the first time in his professional career.

A thunderous left hook come uppercut sent the Kilcullen man into a backward somersault leaving his right foot entangled in the ropes.

Hogan made it to his feet for an eight count but a buoyed Charlo ramped up the ante in search for the finisher.

To his credit, Hogan regained his composure and fought on gallantly but by round five Charlo looked in complete control and it was hard to see how he could inflict any meaningful damage on the 29-year-old, who looked more assured in every department, mixing it up with sharp jabs, his signature uppercut and powerful left hooks.

The vocal Irish crowd did their best to rejuvenate Hogan but by round seven Charlo ended proceedings in devastating fashion.

A smart feint forced Hogan to reach for a counter, but it only served to lower his guard just enough for Charlo to pounce with a flooring left hook.

“The Hurricane” climbed to his feet for another eight count but the wind in his sails vanished with a sideways stumble and the official called time 28 seconds in.

“I wanted to keep going but the decision was fair enough by the referee” said a bitterly disappointed Hogan afterward.

“I didn’t see the punch coming on the second knockdown. I was trying to keep boxing him but then all of a sudden I was on the ground and the fight was over.

“It was different and those times he caught me were just like lightning, I had no idea both times.”