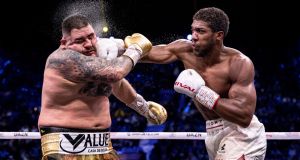 Weeks of promotional hype and political outrage ended in Anthony Joshua easing past an opponent who had barely bothered to train as the so-called ‘Clash on the Dunes’ drifted into anti-climax on a Saudi Arabian Saturday night.

A focused and disciplined back-foot performance from the 30-year-old Briton wrested back his world heavyweight titles by unanimous points decision over a woefully out-of-shape Andy Ruiz Jr.

An unprecedented event had taken one last bizarre twist when a large proportion of the country’s 59mm annual rain fall dumped itself on the partially covered arena in the hours and minutes leading up to its headline contest.

But in the end it was the fight itself that proved a washout as Joshua picked and prodded his way to a victory which appeared secure long before the three judges handed down their 118-110 (twice), 119-109 landslide verdicts.

“Maybe I could have done more at times but simplicity is genius,” said Joshua, who picked up a British record purse in excess of £60million (€71 million) for a win which places him firmly back at the top of the heavyweight table.

“I took it back to the old school, seventies style, and outclassed the current champion.

“There was a time when I looked into Andy’s eyes and wanted to put my fist through his head.

“But then I thought, this is boxing, it’s not wrestling. This is real life, it’s dangerous. I had to box to my plan. My coaches devised a great strategy and I followed it through.”

Hopes of a repeat of the five-knockdown classic in which Ruiz prevailed in their first fight in June was stirred by a lively start which saw both men bloodied around their respective left eyes by the end of round two.

But it soon became clear that Ruiz’s one-stone weight gain was hampering his opportunities to get inside Joshua’s jab as the challenger broadly stuck to the script.

Despite some worrying moments when Ruiz almost succeeded in luring him into his kind of close-up contest — notably when he barged in behind a right hand at the end of the eighth — Joshua was for the most part given a free pass to redemption.

Suspicions had been raised that Ruiz had taken the ‘Buster’ Douglas route to his title reign when he weighed in on Friday more than a stone heavier than for their first meeting, and the heaviest ever for a title fight outside the seven-foot Russian Nikolai Valuev.

And the personable Mexican-American was brutally honest during his post-fight media duties, in which he conceded apparently without a hint of irony: “There’s just a lot of things that were going on my plate.”

Ruiz added: “I should have trained harder and listened to my team. Maybe if I hadn’t put on all this weight I would have been faster.

“He was boxing his life out and there are no excuses. I got him hurt a few times but I let him survive. My arm wasn’t fluid like it normally is and I think that was because of the weight.”

Ruiz’s calls for a third meeting are almost certain to be rejected as Joshua moves up to clean up one of two outstanding mandatory defences against either Oleksandr Usyk or Kubrat Pulev.

What seems clear is that Joshua has emerged with a clearer picture of his destiny following his shock loss to Ruiz, and the new-look champion is determined to keep endless talk of facing Deontay Wilder and Tyson Fury at bay.

“I’m just going to let the path take its course,” added Joshua. “(But) when the opportunity presents itself to become undisputed heavyweight champion of the world, I’ll definitely step up and take the challenge.”

Promoter Eddie Hearn has indicated such future super-fights could take place back in Saudi Arabia and if the cash on offer does make it inevitable, Joshua ought to arrive better-advised after a week in which he conceded in a television interview that he was not aware of human rights group Amnesty International.

In a final, unintentional but highly unfortunate faux-pas, Joshua spoke of how he employed tactics designed to “decapitate” Ruiz, in a country in which 146 executions, many of them public, were recorded last year.

Ultimately, the ‘Clash on the Dunes’ will be remembered for such clanging indiscretions and promotional unseemliness than for anything that happened between the ropes.

Joshua simply got the job done, and for the time being the heavyweight roadshow hauls back westwards where Wilder and Fury are expected to face off in Las Vegas early next year.

Where it takes its ultimate showdown is up to money-men like Hearn. But the sport’s long and indistinguished moral history suggests it will not be long before it pitches up once again on the Saudi sands.