New €50,000 sailing incentive scheme aims to get more under-25s on board

Clubs taking part will get initial grant of €1,500 and funds for coaching and mentoring 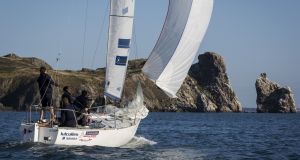 Howth Yacht Club’s original Under-25 team in 2013, skippered by Cillian Dickson from Athlone with his crew Joseph Murphy from Glasnevin, Gordon Stirling from Clontarf, Harry O’Reilly from Sutton and Ross Darmody from Howth. Photograph: David Branigan/Oceansport

A new attempt at scaling up participation in sailing by under-25s will be launched this week by the Irish Cruiser Racing Association (ICRA) with a total fund understood to be upwards of €50,000.

The scheme is intended to bridge the gap between junior programmes – which are in a healthy state – and a fall-off in numbers before adult participation later in life. Clubs can apply to the ICRA to be included in the scheme.

The basic requirement is that clubs commit to the purchase of a suitable boat as the vehicle for their own local scheme.

An initial capital grant of €1,500 will be made available, with further funding intended for coaching support, mentoring and other supports.

A successful applicant will receive larger amounts in the initial years, which will gradually reduce as their scheme becomes established.

Expressions of interest will be sought, with a deadline of two weeks’ time for submission. Club meetings will then be held in January before a formal application, adjudication and awarding of grants in time for the 2020 season.

The scheme is modelled on Howth Yacht Club’s (HYC) Under-25 scheme that started just over six years ago and led to a series of graduates who have become long-term participants in adult sailing.

This example led to the establishment of other initiatives around the country, including at Sligo Yacht Club, from where ICRA committee member Brian Raftery is co-ordinating the new national scheme.

“I spoke to the original group [at HYC] and the big point was that apart from providing a boat, having a mentor to help you made a huge difference – when you’re eighteen you don’t have these skills,” Raftery told The Irish Times this week.

Three of the original HYC sailors went on to become boat owners themselves, one in a J24 competing for the world championship in 2020 and the other with a shared SB3. All are active in other cruiser classes as well.

Raftery acknowledges the potential for conflict if an over-subscription scenario arises, though ICRA’s expectation is that there will be a staggered start to the programme as more and more clubs get involved.

But, in such a maximum capacity scenario, he says that ICRA is committed with Irish Sailing to finding additional resources, as the model would then be proving its own success.

Current projections suggest sufficient resources for 12 programmes between 2020 and 2022.

“The goal is to transition junior sailors to becoming responsible adults who become lifelong sailors,” says Raftery. “They like sailing, they like being part of that community and they end up wanting to give back to that community.”

All Irish Sailing-affiliated category 1 clubs are eligible to apply for this support programme, and the U-25 support programme is funded for new-entrant applications for a total of three years.

Clubs that are not yet ready to participate can apply for support in the following new entrant rounds in either 2021 or 2022. Expressions of interest should be emailed to: U25@cruiserracing.ie