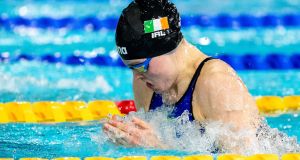 Ireland’s Mona McSharry in action during the final of the 100m breaststroke at the LEN European Short Course Swimming Championships at the Tollcross International Swimming Centre in Glasgow. Photograph: Giorgio Scala/Inpho

Following a historic first for Ireland in the relay this morning, Shane Ryan, Jack McMillan, Danielle Hill and Mona McSharry broke the new standard of 1:32.18 by .32 of a second in the final to finish in eighth place overall. It was a double record for Ryan as he broke Barry Murphy’s 2008 50m freestyle record of 21.53 in leading off in 21.41.

Earlier in the evening, McSharry, who won 50m breaststroke bronze on Wednesday, was competing in the 100m breaststroke final after progressing from last night’s semi-final as the fastest qualifier.

In the final, the Marlins swimmer touched in 1:05.16, her third fastest ever time in the event and just .04 outside the medals. The 19-year-old was upbeat after the swim, admitting she was still learning how to best swim that race.

“It was a great race yesterday in the semi-final and it would have been nice to repeat that, but I’m still learning,” she told RTÉ. “Every time I get in there I swim it differently, so I’m still trying to figure out what works for me, but I’m overall happy with how this week has gone.”

Italy’s Martina Carraro took the gold medal in 1:04.51 with her team-mate Arianna Castiglioni in the silver medal position in 1:05.01, while Jenna Laukkanen of Finland completed the podium in 1:05.12.

Hill continued her assault on the Irish record books with a third of the week in the 50m backstroke semi-final. She was the first Irish female to break the 59 second barrier in the 100m event on Wednesday and followed that up on Saturday by breaking 27 seconds twice in the 50m; first in the heats in 26.92, then in the semi-final in 26.74 to finish 11th overall.

In the 200m freestyle semi-final, Jordan Sloan was just on the personal best he set this morning touching in 47.54. Sloan had progressed in 47.52 from the morning heats ahead of helping the 4 x 50m freestyle relay into the final.

Ireland will get the final day of action in Glasgow underway on Sunday with McSharry and Hill in the 50m freestyle heats.

Hill is the current Irish record holder in the event in 25.00, having broken McSharry’s record of 25.04 just three weeks ago.

Ryan returns, with Conor Ferguson, for the heats of the 50m backstroke, an event in which Ryan won bronze at the World Championships in 2018.

Niamh Coyne and Molly Mayne take on the 200m breaststroke, while Brendan Hyland, Cillian Melly and Paddy Johnston compete in the 200m butterfly. The last heats session will conclude with Ireland’s men and women in the 4 x 50m medley relays.