From Alamosa to Lisbon: tracing the trail of Ireland’s European medal haul

Perseverance pays off handsomely for Cotter and the Flanagan sisters 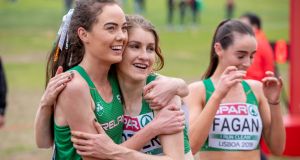 There is evidence of life yet down the old American scholarship trail.

In a departure from some more recent success stories of Irish distance running, much of the medal haul at Sunday’s European Cross Country in Lisbon can be traced directly back to what was once the trail of preference, if not necessity, for many aspiring young runners in this country.

Nowhere is that more striking than with the Irish women’s under-23, who won individual bronze and team silver thanks to the trio of Stephanie Cotter and twin sisters Eilish and Róisín Flanagan, who also all attend Adams State University, a long way from home and Lisbon, situated in the town of Alamosa, in the heartland of the Rocky Mountains, around 220 miles south of Denver.

Adams State, a Division 2 school in the competitive world of American NCAA college sport, may not be as familiar a scholarship trail as the likes of Villanova, Arkansas or Providence College, although it’s certainly serving Cotter and the Flanagan sisters well, and a few others before them.

It was here that 1996 Irish Olympian Shane Healy went to college, as did 2001 World Championship 800m representative Daniel Caulfield (brother of former Cork City manager John), both recently inducted into the Adams State Hall of Fame.

Cotter, in only her second year, hails from Direen, which lies halfway between Coachford and Dripsey in east Cork, and runs with the small club West Muskerry AC: her father Michael Cotter, a former distance runner with Leevale, also spent some time on an American scholarship and there’s little doubt at this point that scholarship trail has served her well.

“My team-mate Eilish, who was our second scorer, also won the silver medal in the 3,000m steeplechase in the summer, in the European under-23, in Sweden,” said Cotter, reflecting on her individual bronze and team silver.

“And we were three girls who I think came very close to giving up the sport, at an underage level. We weren’t amazing juniors or anything.

“But I just think it goes to show if you keep trying, and keep believing, you can come through and score at under-23, and even at senior level. So that’s one of the main take home points, to just never give up, keep trying.”

Cotter also paid special tribute to her coach at Adams State, Damon Martin, who is clearly getting the best out of the Irish trio. The Flanagan sisters, in their senior year, hail from Gortin in north Tyrone, and run with Carmen Runners club, and with Cotter leading them home, the trio finished 1-2-3 at last month’s Division 2 Cross Country Championships, also winning the team title with the lowest score in the college’s history.

In the Irish senior women’s team that also won silver medals, the trio of scorers were Fionnuala McCormack, Aoibhe Richardson, and Ciara Mageean.

McCormack and Mageean both decided to pursue their running careers at home, with considerable success to boot, and in part because of that the popularity of the scholarship trail began to wane – although never fully dried up.

Richardson, the daughter of former Irish internationals Noel and Niamh, attends San Francisco State, and finished 17th on Sunday, three places ahead of Mageean, with McCormack just two seconds away from individual bronze, finishing fourth. Like Cotter and the Flanagan sisters, she tuned up for Lisbon with a 19th-place finish at the NCAA Division Cross Country in Terre Haute, Indiana last month.

Kilkenny’s Peter Lynch, who attends Tulsa University, and Westmeath’s Jack O’Leary, who attends Iona in upstate New York, finished second and third best Irish in the men’s under-23 race, while best of the Irish senior men for the second year was Tipperary’s Sean Tobin, formerly of the University of Mississippi. Plenty more evidence of life down the old American scholarship trail.