US Open: Maria Sharapova dumped out by Carla Suarez Navarro 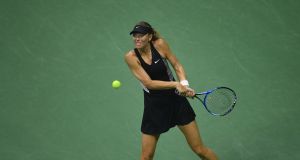 Maria Sharapova is out of the US Open after she was beaten in straight sets by Spain’s Carla Suarez Navarro. Photograph: Don Emmert/AFP/Getty

Maria Sharapova’s long-unbeaten record in night session matches at Flushing Meadows was ended in the fourth round by Carla Suarez Navarro.

Sharapova, the champion in 2006, had won 23 straight matches under the lights, including her previous three contests this year, but Suarez Navarro, on her 30th birthday, clinched a 6-4 6-3 victory to reach her second quarter-final in New York.

It was well deserved for the Spanish 30th seed, who next plays Madison Keys, as she drew the errors from the Sharapova racket — 38 unforced, including eight double faults — and used her flowing single-handed backhand to great effect.

Sharapova matched her performance from last year but then, in her first slam since the end of her doping ban, the fourth round seemed a sign she could return to her best. Twelve months on, that seems significantly less likely.

The 31-year-old insisted she still had belief while putting her relative struggles into perspective.

She said: “If I didn’t have the belief to keep doing this and to keep having the motivation and the grind of doing this every day in order to get myself in these positions, I don’t think I would be here. I think I’ve done plenty in my career, established a lot for myself personally, professionally.

“What’s challenging is when you’re a teenager and you have a few hundred dollars and you’ve got no sense of the future, you don’t know where you’re going to end up. You just have a dream. I think that’s a lot tougher than being 31 years old and having the opportunity to do whatever I want in my life.”

In one of the most highly-anticipated women’s matches of the tournament, between two players who are expected to face each other many more times on the big stage, it was Japanese-American Osaka who prevailed 6-3 2-6 6-4.

Sabalenka saved three match points in the final game and had a chance to hold for 5-5 only to double fault on Osaka’s fourth opportunity.

A very emotional Osaka said: “I was just thinking I’d never forgive myself if I didn’t win that one.”

The tears were also a legacy of the most painful result of her career in New York two years ago when she lost to Keys from 5-1 up in the final set.

She said: “I think it’s mainly because I’ve had a bad memory here. I’ve always dreamed of playing here and going to the quarter-finals and further. So I’m just glad I could do one of my goals.”

Sabalenka, who was not ranked high enough to get into the tournament 12 months ago, has been one of the form players of the summer and arrived in New York on the back of her first WTA Tour title in New Haven before beating Petra Kvitova in the third round.

Osaka felt her extra history on the grand slam stage helped, saying: “I was the player with more experience, which is very odd for me to say. I feel like there were moments that I kind of knew what to do. Maybe since she’s so young, she was a little bit hesitant.

“I feel like I learned a lot the match I played here two years ago. I’m grateful that I had that experience.”

Osaka next faces Ukraine’s Lesia Tsurenko, who struggled badly with the heat on the open Grandstand court against Marketa Vondrousova but battled from a set down to win 6-7 (3/7) 7-5 6-2.

Vondrousova accused Tsurenko of putting on an act, but the Ukrainian insisted her struggles were real, saying: “I don’t know what to say. No, it wasn’t, unfortunately. I’ve never felt so bad on court. Today was one of the toughest matches in my life.”

Keys, the runner-up last year, is the highest seed left in the bottom half of the draw at 14 and breezed through to the last eight again with a 6-1 6-3 victory over Dominika Cibulkova.