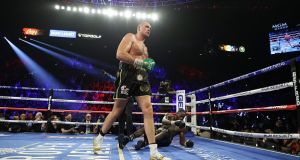 Tyson Fury knocks down Deontay Wilder in the fifth round of their heavyweight bout in February. File photograph: Getty Images

Tyson Fury says he has “moved on” from the prospect of facing Deontay Wilder in December after the American reportedly missed a deadline to secure a third fight between the pair.

The slated December 19th date for the bout had already been thrown into doubt due to television commitments and difficulties securing the venue in Las Vegas.

And the latest developments — which Wilder’s camp have denied — mean Fury is likely to stage a homecoming fight in the UK before moving on to face Anthony Joshua next year.

Fury told The Athletic: “I was looking forward to smashing Wilder again. A quick and easy fight. But Wilder and his team were messing around with the date.

“They don’t really want to fight the lineal heavyweight champion. They know how it ends. The world knows how it will end: with Wilder on his ass again.

In a tweet, Fury added: “The Gypsy King is coming home”, paving the way for his first fight in the UK since his win over Francesco Pianeta in Belfast in August 2018.

Joshua is also set to fight in December, against Bulgaria’s Kubrat Pulev, and if both win they will move on towards a unification bout, the terms of which have already been agreed in principle.