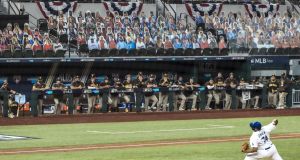 Cody Bellinger hit a home run and made a spectacular, over-the-wall catch in the seventh inning as the Los Angeles Dodgers held on and moved one win away from the National League Championship Series with a 6-5 victory over the San Diego Padres at Arlington, Texas.

Clayton Kershaw (2-0) gave up three runs on six hits over six innings for the Dodgers, who lead the best-of-five NL Division Series 2-0. Kershaw struck out six and walked none to win for the second time in two starts during this year’s postseason.

Corey Seager had a two-run double among his three hits for Los Angeles, and Max Muncy added two hits and two RBIs.

Manny Machado and Eric Hosmer hit back-to-back home runs in the sixth inning for San Diego. The Padres rallied for two runs in the ninth inning against Dodgers closer Kenley Jansen, and they had the bases loaded against right-hander Joe Kelly before Eric Hosmer grounded out to end it.

Rookie Ian Anderson tossed 5 2/3 strong innings and Dansby Swanson and Travis d’Arnaud homered for the second consecutive game, lifting Atlanta to a win over Miami in Houston. The Braves grabbed a 2-0 lead in their best-of-five National League Division Series.

Darren O’Day, Tyler Matzek, Will Smith and closer Mark Melancon did not allow a hit over the final 3 1/3 innings to shut the door on the sixth-seeded Marlins.

Anderson (1-0), who started a 5-0 shutout win over Cincinnati last week, was brilliant once again. He allowed a double by Brian Anderson and two singles while striking out eight and walking one. Miami starter Pablo Lopez (0-1) gave up two runs on three hits in five innings. He finished with no walks with seven strikeouts.

Chad Pinder belted a game-tying, three-run home run in the seventh inning and Sean Murphy hit a go-ahead sacrifice fly in the eighth as Oakland kept its season alive by rallying from a 7-4 deficit to beat Houston in Game 3 of the American League Division Series in Los Angeles.

Oakland closer Liam Hendriks (1-0) pitched the final three innings to earn the victory, giving up no runs and one hit. He struck out four without issuing a walk. Houston reliever Brooks Raley (0-1) allowed two runs in two innings to take the loss.

The teams combined to hit seven home runs (the A’s hit five) and have 18 combined in the series on three consecutive day games, all with a first-pitch temperature of 81 degrees or higher.

Rays left fielder Randy Arozarena homered, had three hits and reached base four times. Arozarena, who did not make his 2020 debut until August 30th, joined Evan Longoria (2008) and Kyle Schwarber (2015) as the third rookie to hit at least one homer in three consecutive postseason games. He also joined Longoria and Carlos Pena (2008) as the only Tampa Bay players to go deep in three straight playoff contests. Longoria’s streak reached four games.

Yankees designated hitter Giancarlo Stanton socked a two-run homer in the eighth, his sixth homer of the postseason in five games.