American Kenin proves too strong for Petra Kvitovain their semi-final 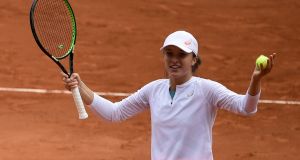 The 19-year-old will play Australian Open champion Sofia Kenin on Saturday in her first Grand Slam final after she knocked out Petra Kvitova 6-4 7-5.

World number 131 Podoroska, who was looking to become the first qualifier to reach a major final in men’s or women’s singles, had no answer to Swiatek’s powerful groundstrokes and sleek movement.

Swiatek had broken serve 27 times en route to the last four and added five more to that count before finishing off the one-sided contest on Court Philippe Chatrier in 69 minutes.

“I’m kind of surprised, really. I always knew that if I would be in a Grand Slam final, it would be at the French Open,” Swiatek said on court after becoming the first Polish woman to reach the Roland Garros final in 81 years and the first at any major since Agnieszka Radwanska at Wimbledon eight years ago.

“I wanted to play this match as a first-round match, I didn’t want to think of it as a semi-final otherwise I would have been too stressed. I just wanted to be aggressive like previous matches. I’m feeling good and like nothing hurts me.”

Swiatek, the youngest player to reach the women’s final at Roland Garros since Kim Clijsters in 2001, looked to impose herself on the match early and jumped to a 3-0 lead.

She managed to hit through the court well, both off the forehand and backhand, and painted the red clay with winners, amassing 23 during another typical performance at a tournament in which she also snapped top seed Simona Halep’s 17-match winning run.

“Usually, I’m that kind of player who is playing better under pressure,” Swiatek told reporters. “If I’m not going to choke up, I think everything will be fine.

“But there’s a reason why I was so efficient. Really I’m staying super focused. I’m not letting my opponents to play their best tennis. So I hope I’m going to do that on Saturday.”

Unable to put up much resistance, Podoroska decided to show more aggression and started coming forward to cut down the time for Swiatek to hit her big shots.

That helped her hold two service games but was not enough to derail Swiatek, who faced just a single breakpoint in the opening set.

Podoroska, who earned more than she had in her entire career by reaching the semi-finals, would have hoped for the tide to turn in the second set but there was no respite.

Swiatek, who also plays in a doubles semi-final on Friday, kept up the tempo and raced to a 4-0 lead before nervous errors allowed Podoroska to avoid a second-set bagel with a break of serve.

The Pole, who has lost only 23 games in six matches, broke back immediately, however, and ended Podoroska’s ordeal on the first match point with an unreturned serve.

American fourth seed Kenin marched into her second Grand Slam final of the year with a commanding 6-4 7-5 victory against Kvitova.

Kvitova, in her first semi-final appearance at Roland Garros since 2012, was often forced out of position by her crafty 21-year-old opponent.

Kenin raced into a 4-1 lead as Kvitova showed some nerves after holding her first service game to love and, despite her Czech opponent finally getting into the groove, it was enough for the American to bag the first set.

Twice Wimbledon champion Kvitova lost her serve to fall 3-2 behind in the second before breaking back for 5-5, only to drop serve again.

Kenin did not miss her chance as she served for the match for the second time, seeing it through when Kvitova’s cross-court forehand flew wide.