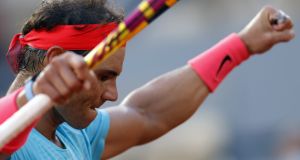 Rafael Nadal sprinted to the semi-finals of the 2020 French Open in just 10 hours without dropping a set before running into a three-hour roadblock called Diego Schwartzman. However, he survived the most intense examination of his pedigree on Friday afternoon to win 6-3, 6-3, 7-6 (0) and will contest the title on Sunday for the 13th time in 15 years.

At 34, the hunger is as strong as when he stepped on to Court Philippe-Chatrier in the 2005 final against Mariano Puerta to win the first of his 12 titles. What Nadal will not know until it is all over is if desire alone is still enough. Victory would draw him alongside Roger Federer on 20 majors, and move him three clear of Novak Djokovic, so the sense of occasion will be considerable.

There were moments in the third set, however, when the redoubtable Schwartzman – who beat Nadal in the quarter-finals in Rome – looked as if he might become the first opponent to take a set off Nadal in six matches. Only Federer and Djokovic have done that to Nadal in a Roland Garros semi-final. Schwartzman would not be joining them, but he went scarily close.

From two sets and two breaks up in the third, a stroll in the park turned into a forced march into the wind.

“I made a couple of mistakes; he played some good points and I missed two volleys,” said Nadal courtside. “From there it was very difficult to the end. He’s one of the players on the Tour who makes a lot of breaks, without a doubt. I lost to him in Rome, so I expected a very tough match. I played against him a lot of times and he gets better every time. In Rome, I didn’t play my best, and he is playing very well every day. Three days ago here, he was amazing against Dominic Thiem. ”

Each had perfect dress rehearsals: Schwartzman had the Roman triumph (his only success in 10 matches between them to that point), then gave Djokovic a good argument in the final. Nadal, meanwhile, recovered from his setback to carve through this card without dropping a set. Only Jannick Sinner stretched him, but not to breaking point. All of that fed into what everyone hoped would be a memorable semi-final.

Over the fortnight, Schwartzman has hit his forehand five miles an hour faster than Nadal; who would have thought that? Certainly not the champion until he felt the weight of it on day 12. Yet, although it took the Argentinian only three minutes to break serve, Nadal came back at him time and again, saving three of four break points and converting the two that came his way, while they traded huge groundstrokes from deep.

When Nadal slapped a 91mph backhand to get out of deuce at the end of a 23-shot rally while trying to serve out the first set, Schwartzman briefly kept it alive, but his weary final backhand into the net told a tale of frustration. There would be no turning back from the attritional blueprint.

A certain inevitability began to grip proceedings when Nadal went 3-1 up in the second. If Schwartzman could not stop the carnage here, his cause looked doomed. While he played every point as if it were his last of the tournament, the encouragement of a large section of the small Covid-limited crowd began to fade by the time Nadal recovered from a minor blip to go 4-2 up, then two sets up.

He took nothing for granted in the third against a minor version of himself, a teeth-gritting streetfighter who refused to fold. The long rallies were spread further apart now, though, and the finish line began to rush towards Schwartzman. Only a Nadal collapse could give him hope.

It was nearly two hours since he had broken Nadal. He had taken 20 points off his serve in the first set, four in the second. But, from 2-4 down in the third, Schwartzman dragged it back to 5-5 as Nadal lost control of his groundstrokes. The pressure had shifted dramatically on to Nadal as Schwartzman, serving for a second time to stay in the championships, hit three glorious winners to force the tie-break. But he wasted two excellent chances in the shootout and could not regain his drive. Nadal, with a cushion of six match points, tidied up the win when Schwartzman stuck his last backhand into the net.

The Argentinian battler named after Diego Maradona was acclaimed at the end as if he had won the World Cup. As Djokovic said before the match: “Everyone loves Diego.” Even Rafa – but not as much as he might have done before that drawn-out conclusion. - Guardian