Sanita Puspure comes through semi-final to set up title defence 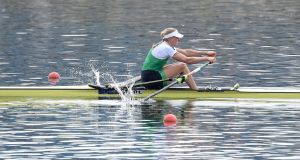 It’s probably going to be close and definitely exciting but Sanita Puspure is in there with a shout and that’s good enough for now.

Calling on all her strength and experience, Puspure came through her semi-final of the women’s single sculls at the European Championships in Poznan in Poland on Saturday morning, setting up Sunday’s final showdown to defend the title she won in Lucerne last summer.

Going in the second semi-final, Puspure finished second with a time of 7:37.84, the win there going to Austria’s Lobnig Magdalana, as it did in Friday’s heat, in 7:34.59. With the first semi-final won by 23-year-old German Pia Grietin in 7:33.78, the top three there finishing under 7:35, it means Puspure will start the final as the fifth fastest of the semi-finals, knowing some improvement will be needed if she is to make the podium this time.

That women’s single sculls final is set for 1.31pm Irish time – and can be seen live on the RTÉ player.

Puspure’s progression rounded off another excellent morning all round for the seven Irish crews, five of which will race in their A-finals, two more in the B-finals.

The women’s pair of Tara Hanlon and Emily Hegarty raced in their repechage with big competition from Belarus, the Netherlands and Denmark, and finished first with a time of 7:16.67, booking their place in the A Final.

In the men’s double sculls, Daire Lynch and Ronan Byrne nailed third in their semi-final with a time of 6:21.66, also securing their place in the A Final tomorrow. Fintan McCarthy continued his excellent form in the lightweight men’s single sculls, facing a tough race with crews from Italy, Belgium and the Czech Republic, and took second with a time of 6:57.10; another A final awaits.

Also the Irish women’s four crew of Aifric Keogh, Eimear Lambe, Aileen Crowley and Fiona Murtagh comfortably finished first in their repechage with a time of 6:26.96.

RTÉ will be covering the racing on the RTÉ Player tomorrow; RTÉ will also be showing a highlight show on RTÉ2 on Sunday at 6:30pm