America at Large: The evolution of LeBron James still hampered by blind spots

Having found his voice late in his 20s, basketball’s best player has let it be heard 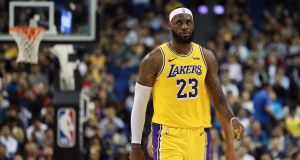 The evolution of LeBron James. In 2007, Ira Newbie, a Cleveland Cavaliers bench player, penned an open letter about the genocide in Darfur to the Chinese government, demanding Sudan’s main trading partner use its influence to try to stop the slaughter. A noble if quixotic attempt to shine light on a dark corner of the world.

When Newbie brought his missive around the locker-room for his team-mates to sign, James refused, citing the lack of information available about the issue. After he subsequently launched a signature shoe called “LeBron V China edition”, many assumed his reluctance to call out Beijing was commercially-motivated.

The impression that James was going to be an apolitical shill cut from the Tiger Woods mould took root the previous year after the New York Knicks’ Stephon Marbury launched a revolutionary brand of basketball shoes called “Starbury”. Retailing for just $14.99, about a tenth of what a kid would pay for something with the Adidas or Nike logo on it, Marbury’s valiant and ultimately doomed attempt to disrupt the lucrative sneaker industry was designed to make quality footwear available to the less well-off. Asked if he would ever wear them, James, then midway through a seven-year $90 million deal with Nike, was utterly dismissive, “No, I don’t think so. Me being with Nike, we hold our standards high.”

A pair of incidents that made a mockery of the twenty-something James’s assertion that he wanted to be the next Muhammad Ali. Studiously avoiding divisive issues made him sound a lot more like the next Michael Jordan, the man to whom he had been most often compared. As he assiduously built a career to match his hero’s on the court, failing to use his profile off it for the greater good often brought to mind Jordan’s infamous refusal to back a black Democrat over a white racist candidate for the US Senate because, “Republicans buy sneakers too!”

While basketball aficionados now argue long into the night about which one of them can lay claim to being the best player ever, America’s version of the Messi v Maradona debate, the argument about greater impact has already been won by James.

It took Jordan nearly four decades in the limelight before he suddenly, belatedly discovered a social conscience and almost embarrassingly reckoned it was okay to speak out on social issues. James started to find his voice at 27, specifically in the aftermath of Trayvon Martin being shot dead by an over-zealous neighbourhood watchman in Florida, his crime wearing a hoodie while carrying a packet of skittles.

It’s difficult to reconcile the younger, milquetoast version of James with the political tour de force now on the verge of clinching his fourth NBA title with the Los Angeles Lakers. Immediately after defeating the Denver Nuggets in a crucial playoff game last month, the 35-year-old used an on-court television interview to deliver a moving soliloquy about Breonna Taylor. An athlete still in the arena, sweat dripping from his brow and a towel around his neck, using his platform to draw attention to the fact no charges were being brought against the police officers who killed the Louisville woman last March.

That was only one screengrab from the litany of times he has stood up to be counted in recent times. In a career move that Jordan so meticulously avoided, James has become a polarising figure in the culture of a troubled, racially-divided nation, a vocal athlete willing to put his mouth and his millions behind causes from voting reform to calling the president a “bum”. Comparisons with Ali that once seemed naive, fanciful and just plain wrong now appear almost on point.

In February, 2018, Laura Ingraham, the especially loathsome Fox News channel host, delivered an invective against James, questioning his right to speak on social issues and demanding, instead, that he, “Shut up and dribble!” He responded to her shrill hectoring in the most 21st century way possible, showcasing the influence he wields far beyond the NBA. Using his own film production company in Hollywood, the man who grew up in abject poverty in Akron, Ohio produced a three-part television documentary series about the history of black athletes and activism, calling it, “Shut up and dribble!”

This is why he’s the poster-child for a generation of media-savvy sportsmen and women who realise their immense wealth and celebrity profile afford them the opportunity to campaign for social justice. Aside from a host of philanthropic missions, including a school for at-risk students and a promise to underwrite college education for thousands of kids, he recently founded “More Than a Vote”. Designed to get out the vote in the black community, this initiative has already paid off the outstanding debts of former felons in Florida so they can cast ballots on November 3rd.

“My goal is to educate not only my peers, but their communities as well to let them know that our voice is being heard,” said James. “Our vote is being counted.”

There remains a troubling blind spot. When the Houston Rockets general manager Daryl Morey expressed support for pro-democracy protestors in Hong Kong last year, James refused to back him up, arguing, “I don’t want to get into a feud with Daryl Morey, but I believe he wasn’t educated on the situation.”

Shades of Ira Newbie and Darfur all over again. The evolution of LeBron James is impressive but still a work in progress.

1 Ireland, France or England? Who needs what to win the 2020 Six Nations
2 ‘This is not a personality contest’ - Jack Nicklaus endorses Donald Trump
3 Galway United replace Cabinteely in playoffs after Wexford win arbitration
4 America at Large: Golfers guilty of legitimising Trump’s toxic regime
5 Football 2020: It’s a knockout revisited – ‘You played, you lost, you went home’
Real news has value SUBSCRIBE