YMCA see off Banbridge resurgence to remain at top of table 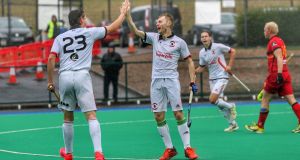 Following YMCA’s third and most eye-catching win to date, the question becomes when does it stop being a surprise as they sit atop the men’s EY Hockey League after three rounds alongside Lisnagarvey.

The Ballinteer club beat Banbridge 3-2 in Co Down and now already have three-quarters of their points total of last season and a world away from a side likely to be involved in the relegation mix.

Ross Henderson’s impudent finish through Luke Roleston’s legs was added to by one each from South African duo Grant Glutz and Peabo Lembethe for a 3-0 lead.

Olympian Eugene Magee got one back before half-time and Eddie Rowe put them within striking range as they threatened another big comeback like the one they managed seven days earlier to draw with Glenanne.

But YM’s corner defence is teak-tough and they kept out a barrage of four set pieces in the closing minutes to earn their win.

Garvey’s journey to the top was more serene, sweeping aside the challenge of Corinthian 6-0 at Comber Road with rising star Troy Chambers on top form, scoring twice and setting up another couple.

Monkstown, meanwhile, lost their perfect record in the game of the season to date, a 4-4 cracker against UCD at the Merrion Fleet Arena. The lead swapped hands an incredible four times with the home side leading within two minutes via Stephen Cole’s penalty stroke only to fall behind to goals from Sam Walker and Guy Sarratt.

It was 3-2 to Town by half-time but they never got a handle on the effervescent Mark Samuel on the right flank and they were behind once more in the closing 10 minutes when Walker snatched his second of the day.

But Davy Carson popped up at the right time to finish off Rory Nichols’ cross to end the tie honours even.

Sam Walker’s older brothers Ben and James were both on the mark for Three Rock Rovers as they thumped Annadale 10-0, nine of them in the second half.

Dale’s outlook was already forlorn at 6-0 with 22 minutes to go when goalkeeper Sam Hamill pulled a hamstring. With no replacement goalkeeper on the bench, they considered padding up an outfielder but the necessity to sanitise his kit meant that was ruled out and Rovers promptly put four into an unguarded goal.

Pembroke got their first win of the campaign with a 2-1 success over Glenanne, Cian Murphy flicking in the winner in the fourth quarter.