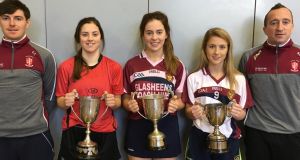 The old streets of Thurles have rattled and hummed to a sporting beat for so long that its place in our hearts can often be taken for granted.

Birthplace of the GAA, summer hurling in Semple Stadium, history-making deeds . . . but something new, something historic in its own right, has been stirring of late with Presentation Secondary School – an oasis of sporting endeavour in the midst of the town – achieving grades that are, well, unique.

As a case study in how to create a winning culture, in how to intertwine the different sporting codes, of how to make the numbers work, the feats of Presentation Secondary School takes some beating.

At a time when we hear of the dropout rate of teenage girls from sport, of burnout, this is a story that invigorates. It bucks whatever trend we’re constantly warned about. It inspires.

“It’s been a crazy year,” acknowledges Barry Ryan, a former League of Ireland striker with Kilkenny City, who – along with Cian Treacy, a hurler of note with Thurles Sarsfields and manager of the Tipperary minor camogie team – has instilled an ethos on the sporting field that mirrors the academic expectations of the 670-pupil school.

If they’re not careful, the danger will be in how to house all of the silverware that has come their way. It’s a nice problem to have, for sure.

So far in 2018, an historic treble – of camogie, Gaelic football and soccer titles – has already been annexed in Munster; and the hunger for more is ongoing, with the first leg of national glory, the FAI Senior Girls National Cup, also claimed.

It is also a tale of redemption. Last year the school knocked on the door so often only to be pushed back. At the start of the school year, when the camogie players and the footballers were brought together, a question was put to the girls enquiring as to what they believed had been the missing link last year when they lost the Munster ‘A’ camogie final by a point and the provincial ‘A’ soccer final by a goal.

“We were literally a matter of inches from doing the treble last year; the way we handled those defeats, we came back at the start of the year, analysed why we lost, and the consensus from the players was maybe we were not hungry enough in the last five minutes [of matches]. Everyone, people holding up hands, answering, ‘were we hungry enough?’” recalls Ryan.

Hunger wasn’t an issue in the new campaign.

In the Munster camogie final, Pres – agonisingly beaten in the past two deciders – were again trailing deep into injury time against Coachford College from Cork. But with six minutes of added time on the clock, Grace O’Donnell – a boarder and a Kilkenny minor – fired home the winning goal.

“The way we look at it, there is honesty [from the girls]. We don’t say, ‘ah look, we were unlucky’, this year we had that little bit of hunger that maybe we lacked last year. I don’t think it was a coincidence that suddenly we were lucky this year.

“There were reasons we lost [in 2017] and the girls are brilliant, saying ‘maybe we didn’t do this, didn’t do that, can we train harder?’ We feel we are preparing them for life with that attitude, we are not doing this kind of snowflake generation thing,” is how Ryan puts it.

Another example of Presentation’s thinking outside of the box came in the FAI National Cup Final played at Home Farm FC in Dublin, where two 14-year-olds – Aoibheann Clancy, an Irish underage international, and Emma O’Sullivan – scored the winning goals against Moville Community School. It is an Under 19 competition.

In many other schools, or clubs, that wouldn’t happen. They wouldn’t get the chance.

“It’s unusual,” admits Ryan. “In most schools, there’s a thing where fifth- and sixth-years would always be on the team and the younger girls wait for their opportunity. We don’t operate in that way. We say to the girls, ‘look there is no sense of entitlement, everyone has to work hard’, it is that mantra no one is going to hand you anything.

“If you’re a sixth-year and the second year [student] is working and playing harder, she’s going to play. They totally buy into that. There is a real unity. It is amazing to watch at breaks, and the second-years are sitting at lunch with sixth-years, because the sport brings them together.”

Also, purposefully, there are large panels.

“We have 36, 37 girls in a panel. We put as much emphasis on the girl who is 37 as much as the girl who is number one. Someone who might not be always starting might be organising something; everyone is really valued, and they love being part of it.”

Sport is important. Presentation was known primarily as a basketball school down the years. It boasts a fabulous sports hall, with international-size basketball court and retractable seating, and internationals (and sisters) Gráinne and Niamh Dwyer are past pupils. The school still competes at elite, All-Ireland level in basketball. But, now, the success of the footballers – soccer and Gaelic – and camogie players has brought fresh sporting glory.

“There is a big thing [in sport] at the moment, almost as if winning is a dirty word, that it is all about participation. We don’t believe in that. We have a mantra: inside the classroom and on the pitches, we are going to get every inch of your potential out of you.

“Not every pupil is going to get an A1, but if you are capable of getting a B1 or a B2, you will get that. If you are a soccer player who is capable of competing, we are going to get every inch out of you. We push the girls, don’t put a gun to anyone’s head saying, you have to win; but our aim is to win. We are not saying ‘well done girls, it is all great’. We really push the girls and that’s what they want as well. We want to get everything out of them, inside the classroom and outside the classroom....parents have bought in on that as well.

“We prepare differently I’d say than 99 per cent of the schools that we play against; everything is done after school and at lunchtime because we don’t interfere with class time at all. Everything is juggled that we don’t miss any school. The main priority in school is grades.

“But (when it comes to sport) we have a team meeting, the names of the opposition team would go up on the board. We would do our research on them, check websites, social networks, go through the different players, where they play with their clubs, and designate certain girls to do a job. We literally do everything bar video analysis, we don’t have access to that; but we would have physios, basically prepare in every sense like a professional outfit.

“The biggest thing we take, what we want, is that when they leave the Pres they bring the leadership and the way things were done here into their clubs; when they go to college, they emerge as leaders.

“It isn’t even about the medals, they’re brilliant and a great success, but we feel because of the background, and the way we compete and prepare and their attitude, that they are taking responsibly at 14 and 15 years of age. Long term, whatever they do in college, even if it has nothing to do with sport, they become leaders and they’re very successful on the back of it.”

No snowflake generation; just doers, and winners. Learning, and taking winning in their stride.