23-time Grand Slam champion: ‘My comeback could not have come on a better day’ 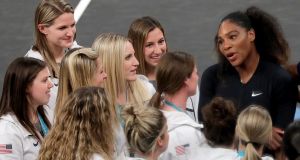 Serena Williams returns to the full glare of the tennis tour on Thursday – appropriately, on International Women’s Day – more than a year since beating her sister, Venus, in the final of the 2017 Australian Open and six months after surviving a pulmonary embolism giving birth to her first child, Alexis Olympia. It is the sort of grand entrance befitting one of sport’s most remarkable figures.

“I never questioned my return,” the 36-year-old owner of an Open-era record 23 major singles titles said on Wednesday before her comeback match, against Kazakh Zarina Diyas, 24, in a night match in the Paribas Open in Indian Wells – but that is not the whole story.

After testing her fitness in the short-form Tie Break Tens at Madison Square Garden in New York – where she defeated Marion Bartoli, another player on the comeback trail, before losing against Zhang Shuai – Williams told the BBC: “There have been so many days, even still, when I’m like, ‘How am I going to keep going?’ It’s been really, really difficult.

“But I keep going and I know that I might not be at my best yet. But I’m getting there and every day is a new day and every day I should be getting better. As long as I’m moving forward, even if it’s at a turtle’s pace, then I’m definitely OK with that.”

Williams has made fleeting appearances since she won in Melbourne 14 months ago while seven weeks pregnant: an exhibition match in Dubai in December and a doubles match for the United States Fed Cup team against the Netherlands last month. But this is high-octane stuff. Here, at a venue that has not always been among her favourite places to play tennis – she won the title twice, in 1999 and 2001, before boycotting the event for several years because of racial harassment – she will have to prove she still has what it takes to produce her best under pressure on the Tour.

Unseeded because of her long absence from the game, Williams did not get a first-round bye and must hold her nerve in the spotlight against an opponent ranked 53 in the world but who is sure to make the most of her opportunity.

Williams could not hide her joy in the lead-up to her return, sharing her emotions across social media platforms. “It’s official,” she said on Instagram. “My comeback is here. This Thursday I will start playing tennis again professionally for the first time since giving birth to my daughter.”

The American made it plain she wants her to support her main charity, the Yetunde Price Resource Center, which raises awareness and money for individuals affected by community violence.

Williams said: “This whole month I am playing tournaments in California and Florida – both my home states. Thursday, the day I play my very first match, marks International Women’s Day. My comeback could not have come on a better day and I decided I wanted to do something different, [TO]let you all be apart of my long journey back [if you want of course!!] So I created my Serena Gold toned ‘S’ pin. When I am playing you can wear it and show support not only from me but also for my charity.”

Everyone wants her back – from on-court rivals to admirers in the men’s game, including Roger Federer, whose remarkable longevity has run parallel to Williams’s. He is three slam titles behind her and said recently: “I always love watching the women’s game, but I’ve never really looked to Serena as wanting to eclipse her in anything.

“I’m just happy that both [her elder sister] Venus and Serena are still playing, because I thought a few years back when they were not well, they had injuries and worries, that they were going to leave the game much earlier.”