Gannon Cup, the final event of the Colours Races, is on the Liffey in Dublin on March 18th 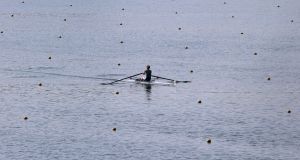 The Erne Head of the River in Enniskillen holds pride of place this weekend. The 5km test on Saturday is a deferred event, and the delay of a week has blunted some of the competitive edge. Commercial’s top eight will not make it, and NUIG’s senior eight are also absent, competing at the Heineken Roeivierkamp in Amsterdam.

Trinity will have a strong senior men’s eight, but their priority is the Gannon Cup, the match with UCD which is the final event of the Colours Races, on the Liffey in central Dublin on Sunday, March 18th.

The Colours coin toss on Thursday gave UCD the advantage of the north station for both women and men. Trinity’s American coach Richard Ruggieri is bullish. “As far as we’re concerned the south side is the best side now!”

Ruggieri will be experiencing his first Gannon Cup, and the challenge is not lost on him. “We’re one from 10,” he says [Trinity last won in 2015, having not won since 2007]. He says he will have “a new crew”, with just three from the eight of last year.

Amsterdam is not the only overseas venue at which Irish rowers will compete in the next few days. Queen’s University have two eights entered in the Women’s Head of the River in London on Saturday.

On Monday, Enniskillen RBC and Methodist College, Belfast, compete in the Schools’ Head of the River, also on the Thames in London. Enniskillen did very well in the Championship eight last year, but drop down a level and go off 28th (13th in First Eights). Methody are set to go off 17th (second crew off in the First Eights).

Both schools have also entered women’s First Eights, and Methody have a junior 16 women’s eight and a men’s Championships Quadruple

Ireland lightweight coach Dominic Casey was honoured at the Federation of Irish Sport Industry awards. He and Paraic Duffy, the long-time director general of the GAA, shared the award for Outstanding Achievement/Contribution to Sport.

A well-wrought entry submission (reproduced on the Rowing Ireland site) touches on some of the key features of Casey’s personality: how he finds and hones the hunger in his charges; how he shuns the limelight; above all, how he is always open to learning.

Casey did not attend the awards ceremony, leaving that job to outgoing CEO of Rowing Ireland Hamish Adams.

The closing date for applications to take over from Adams is Monday, March 12th. There has been a good level of interest.

The documentary Pull Like a Dog, telling the story of Paul O’Donovan and Gary O’Donovan, is part of the programme of the Irishfilmfest in Boston this year. It will be shown on Saturday, March 24th.