‘It probably hasn’t sunk in yet, but that is, I think, my first Grand Prix five-star win’ 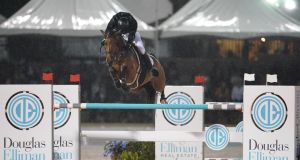 Rain fell throughout the 40-runner class with just six combinations going clear over the first round of the 1.60m track designed by Ireland’s Alan Wade, who will be building at the World Equestrian Games in Tyron, North Carolina in September.

Coyle, who won Wednesday’s opening international class of week nine at the Winter Equestrian Festival, was fifth to go in the jump-off round and, knowing he would be second or better if going clear, did so in a time of 42.51. Irish team chef d’equipe, Rodrigo Pessoa of Brazil, finished second with the fastest four-fault round on Chaganus (39.59) while his countryman, Rodrigo Lambre, was third having had a rail down in 41.62 with Coleman.

“I suppose I had a big advantage tonight,” said 23-year-old Derry native Coyle of his position in the jump-off. “My plan was to be clear no matter what because there weren’t any at that time, so it worked out well for me.”

Regarding the weather, Coyle commented: “It’s different conditions, but when you go in the ring, you kind of forget it. Then, when you come out and go back through your round, yeah, it probably does play a part. But at that time, you have to forget about the rain; forget about the conditions and try to get on with the job that you’re trying to do.

“It’s really exciting,” concluded Coyle who is 41st in the latest FEI world rankings. “It probably hasn’t sunk in yet, but that is, I think, my first Grand Prix five-star win. There’s nowhere better to do it than here.”