How the remarkable Paul Magriel thrived on chance and chaos

America at Large: The professor of mathematics became a backgammon master before hitting the poker tables 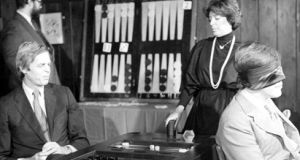 George Plimpton plays against a blindfolded Paul Magriel in 1977

Long after his participatory journalism heyday had passed, George Plimpton got into the arena to measure himself against the professionals one more time in 1977. He challenged Paul Magriel, then the greatest player in the world, to a game of backgammon at Manhattan’s 21 club. To level the playing field, Magriel, variously known by the rather intimidating nicknames of “The Human Computer” and “X-22”, agreed to compete with a scarf blinding his eyes, his back turned to the table, and an assistant throwing the dice on his behalf.

“I have nothing at stake except the honour of my psyche,” said Plimpton with typical grandiloquence. “My tactics are going to be to talk as much as possible, ply him with drinks, and do everything else I can to befuddle him. If he loses track of a single piece on the board, I win.”

Despite the handicap, Magriel won easily. Ironically, it had been Plimpton’s wife Freddy who taught his vaunted adversary how to play the board and dice game whose roots go back to the Sumerians of Ancient Mesopotamia. In the seven years since his first lesson, Magriel’s progress had been extraordinary. He had abandoned a promising academic career as a professor of mathematics, turned pro and became famous enough to be the first backgammon player to get a lengthy profile in Sports Illustrated magazine.

In the Bondesque portrait photograph accompanying that 1979 article, he wore shades, a dark suit and tie, looking suave and sophisticated under the headline, “A gamesman’s war against luck, disorder and surface chaos.” In more recent times, most notably at the poker tables in Las Vegas, he cut a dishevelled figure, increasingly resembling one of those infamous Nick Nolte mug shots, replete with impressively unkempt hair and startled expression.

The decades since his 1970s pomp were tough, battles with substance abuse and several marriages, but when he died in his sleep last week, at the age of 71, Magriel’s passing prompted several publications to revisit what was truly a remarkable American life.

He grew up in privileged circumstances on the upper East Side of Manhattan, the son of an art dealer father from Latvia and an architect mother. Childhood summers were spent in Cape Cod, where he used to go deep-sea fishing with Norman Mailer, and the south of France. At the prestigious Dalton School in New York, he was seven years old when he started running games of chance and fleecing his less savvy peers. the lucrative racket eventually coming to an abrupt end when one kid lost $5 (a lot of money in the early 1950s) and complained to his mother.

A nationally-ranked junior chess player, he graduated a year early from New York University, and worked briefly researching probability theory for the great mathematician William Feller at Princeton, before gaining a teaching position at the New Jersey Institute of Technology. While working there he started to cross the Hudson River in the evenings to dabble in backgammon at New York’s Mayfair Club.

Soon, he was going straight from the table to the lecture hall without sleep and his winnings (sometimes $1,000 a point) began to dwarf his academic income. When he began spending weekends flying to Europe and the Caribbean for high-stakes tournaments, having to get back in time for Monday morning classes quickly lost its lustre. Teaching had to go.

“I am addicted to games in general,” said Magriel. “Games are controlled violence. You take out your frustrations and hostilities over a backgammon set. In games, you know what’s right and wrong, legal and illegal. In life, you don’t!”

With his first wife, Renee Roberts, he wrote a pair of acclaimed books on backgammon that, decades after first publication, are still regarded as standard texts for devotees of the game.

At the height of his fame, he also had a weekly column in the New York Times and became the most sought-after teacher in the world for those interested in honing their skills with the dice. Among his high-profile roster of students were Lucille Ball, Hugh Hefner, and Prince Nawaf of Saudi Arabia who used to fly him to Riyadh for tutorials.

While many assumed his background in mathematics and probability theory afforded him some unique advantage, Magriel chafed against that notion. He also decried those who reckoned backgammon was merely about luck, arguing that the dice certainly caused chaos but the skilled player developed the ability to discern patterns within it.

“I’m always at war with luck and disorder,” said Magriel. “I’m always trying to impose my will over the randomness of the dice, over what seemingly has no structure. I may be sounding sort of melodramatic, but what I’m trying to do in backgammon is create order out of chaos. I guess in a psychological sense, I’m trying to make sense out of the world.”

That struggle remained a constant. In later years, he brought his brilliant mind to Wall Street for a stint as a trader, and then segued into professional poker, often causing a stir at tournaments with his crumpled appearance and eccentric mannerisms, especially a tendency to mutter “Quack! Quack!” when making bets. In an audacious move, he ousted perennial champion Phil Hellmuth from the 2005 World Series of Poker, the television cameras capturing the usually smooth loser storming from the table, describing Magriel as “that maniac”.

A denunciation he would surely have enjoyed.