Thomas Barr has sights set on Worlds and Olympics 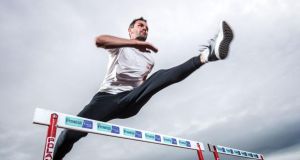 After a summer of success from the junior wing of Irish athletics, the seniors are looking up. A vein of young talent ripping through and swaggering at European and world level are shaping things from below. Role models can work both ways.

“It was definitely inspirational for me,” says Thomas Barr. “It put a bit of pressure on us seniors to go out and follow in their footsteps.”

A bronze medal from Barr in the 400m hurdle European Athletics Championships added a burnished look to Ireland’s ringing summer of athletics.

The thrum of interest, a sense of what next from the young names emerging and the Dunmore hurdler settling in with the best of Europe on the podium gives him a less fearful view of the 2020 Tokyo Olympics, now another potential landmark.

Major championships are comfortable ground for the 26-year-old after breaking his fourth place in the Rio Olympics. Having something tangible to hold for his Berlin work is vitally important.

In that vein Barr looks towards the next phase better equipped to make his way through the minefield of qualification and heats. Fit and healthy he’ll back himself.

Fourth in Rio, he was forced to withdraw from the 400m hurdles semi-final heats at the 2017 World Athletics Championships after a bout of gastroenteritis. Then this August and his 46.31 seconds run after coming into the championships a little under the radar.

“I’m realistic and very logical,” he says. “I knew going into that race I can finish third. But I knew also anything can happen in the hurdles. I could have easily come first as well if (Karsten) Warholm and (Yasmani) Copello messed up because in the hurdles if you mess up a stride pattern, if you hit a hurdle, lose the head halfway around, that’s it. You are out of the game and it’s someone else’s chance to step up.”

That attitude he will take to the World Championships in Doha at the end of September and then, well, the Tokyo Games. Making it through to a final in one piece, he believes is the clever part. In that scenario World and Olympic medals are possibilities. He knows it. He’s proved it now.

“Oh yeah. One hundred per cent yeah. If I’m in good stead,” he says. “If my training has gone well. If I’m fit enough, fast enough to get into a final then the final is wide open. You will often see the favourites in 400m hurdles finals not coming through and winning in the Olympics.

“There is always a medal there for the taking. When I went into Rio I went in with the mindset that I could win this. I was the same in the Europeans. I had my own race plan. I had gone through the race in my head over and over. I went in prepared for every eventuality.”

There is a certain irony in Barr celebrating the success of the young Irish athletes and the energy he derived from their performances and success over the summer.

As an 18-year-old he almost gave up on the sport. The discipline, the training just didn’t add up to what athletics was giving him back.

Now the hurdler is promoting the Irish Life Health School Fitness Challenge which has already yielded difficult, if unsurprising findings.

The largest fitness study of its kind in Ireland shows 34 per cent of girls and 41 per cent of boys aged 16 do not meet minimum levels of fitness. The research carried out by Prof. Niall Moyna (DCU) reveals a steady decline as students progress through secondary school.

“I saw there was this whole other world outside this discipline of training and athletics. It was like I don’t know if I even want to keep going. My parents were very shocked. They didn’t want me to waste a talent that they saw and I didn’t really feel I had.”

Everyone knows it now.