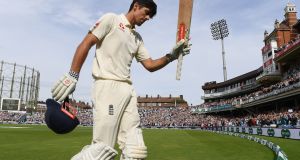 England’s Alastair Cook acknowledges the thunderous prolonged ovation as he returns to the pavillion after being dismissed for 147 in his last Test match against India at The Kia Oval in London. Photograph: Mike Hewitt/Getty Images

The Oval was the place to be.

For those who crave records, and cricket fans tend to like them, they came and went with the frequency of ticket touts on the Harleyford Road.

For those who like a touch of melodrama there was the fall of three wickets in the final session in the space of six balls at the start of India’s final innings of the tour. Two of them fell to Jimmy Anderson and took him to 563 in Test cricket, the same number as Glenn McGrath.

Perhaps Anderson could surpass the great Australian with the wicket of Virat Kohli, whom he has failed to dismiss in this series despite herculean efforts to do so.

No, that was not possible even on a day when his namesake, Hans Christian, might have been compiling the script because Anderson never got the chance to bowl at Kohli. India’s captain faced one ball and it was a good one from Stuart Broad. He edged it to Jonny Bairstow behind the stumps. So India were two for three before the fourth over was complete in pursuit, as they say, of 464 for victory. This was not a day to leave early.

There had already been landmarks aplenty, most of them relating to Alastair Cook. In fact by tea we were close to saturation point.

Already Cook had notched up a career best number of standing ovations, all deserved, all modestly acknowledged. There were moments when he seemed almost embarrassed by all the attention.

He had purred past the number of Kumar Sangakkara’s runs and so became the highest scoring left-hander in the history of Test cricket. Once he had reached three figures, the fifth man to do that in his final Test, he had surpassed the number of centuries scored by Steve Waugh.

The tweets started to mount up – among them messages of congratulation from the unlikely trio of Mick Jagger, Jamie Carragher and Theresa May. Are they not aware that Cook has shrewdly shunned social media over the last decade?

Joe Root, meanwhile, scored his first Test century in more than a year and KL Rahul broke the record for catches taken by an Indian outfielder in a Test series. Fatigue began to set in.

When the Oval volunteers – men and women who point you in the right direction with a smile – did their lap of honour at the tea interval it seemed that the crowd did not have a good ovation left in them.

Cook, however, gave the impression of a man with gallons of fuel left in his tank. His batting in the morning was as carefree as it has ever been. But it was never careless. With his uncluttered mind he kept playing all his favourite shots again and the runs came easily. Root began to catch him up yet all eyes remained on England’s departing titan as three figures approached.

Kohli did not feel inclined to over-bowl the pacemen who have served him so well throughout the series so Cook and Root were able to pat away the two spinners.

By 12.44pm Cook was on 96 and facing Ravindra Jadeja; he cut to deep backward point for a regulation, gently-jogged single. There Jasprit Bumrah, the most whole-hearted of cricketers, spied Cook jogging slowly and he was minded to hurl the ball towards the bowler’s end. There was nobody backing up, the ball sped to the boundary and Cook broke into a smile. He was now 101 not out and the crowd rose to their feet and just kept on clapping. For a few moments it was not obvious how the game would ever restart.

After lunch it was Root’s turn to take centre stage for a moment or two. On 94 he was dropped at slip by Cheteshwar Pujara but there would be no further alarms.

Soon he nudged on the off-side against Jadeja and Cook responded to his call. Root had posted his 14th Test century and his first since the floodlit match against the West Indies at Edgbaston in August 2017.

His celebrations were more athletic than Cook’s; he leapt in the air, which he then punched, and his relief seemed far more palpable than that of his beloved opening batsman. Root’s 100 is indeed more significant than Cook’s – since he’s back on that bike again – but try telling that to the 19,000 cheerful spectators at the Oval.

Then, after adding 259 together, Root and Cook were dismissed in consecutive deliveries against the unlikely offspin of Hanuma Vihari. The batting thereafter was frenetic but at least we were reacquainted with a Ben Stokes set on hitting the ball to the boundary and beyond while contributing a run-a-ball 37 before he was caught at deep midwicket.

Root declared when 463 ahead and Anderson set to work. Shikhar Dhawan, who has had a wretched series, was struck on the pad and correctly advised not to try a review; the same applied to Pujara three balls later.

With Kohli’s departure there was another Kennington roar, after which Rahul and Ajinkya Rahane batted defiantly to avoid a domino collapse.

It had been a fabulous day, which left just about everyone glowing as the drama continued into the final session.

This game of cricket was not such a bad sport after all, accessible and fun. It was about now that the communications team of the ECB, which may well be eager followers of The Thick of It, chose to publish its plans for the pilot days for the “new competition” at Loughborough and Trent Bridge later this month. The timing was odd and somehow managed to douse some of the pervading optimism at the Oval.