The story behind the incredible Ingebrigtsen brothers

At 17, Jakob has joined his older brothers on the winners’ podium, and he’s not the last 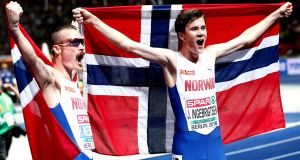 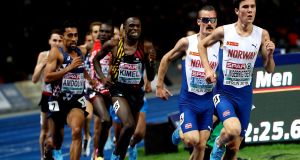 Jakob and Henrik Ingebrigtsen of Norway on their way to first and second place in the men’s 5,000m in Berlin, last Saturday. Photograph: Felipe Trueba/EPA

Ingebrilliant. Ingecredible, Ingesane. They’re running out of words to describe the youngest of the three Ingebrigtsen brothers – who at just 17 has already won what no other man, woman or boy could win in the long history of European distance running.

Jakob Ingebrigtsen’s 1,500m-5,000m double over the weekend was the first in the 84-year history of the European Athletics Championships – only that doesn’t begin to do justice his achievement. Already the youngest-ever European champion, winning that first double in the same championships at age 17 defies most distance-running logic – or at least some laws of it.

The other incredible part of it is that the youngest of the brothers is only getting going – and they’re already predicting that another brother will come through.

His winning performance over the 5,000m on Saturday night, as it was in the 1,500m the night before, was smooth and utterly devastating – and so naturally convincing to be beyond what anything even the finest old East German chemistry lab could ever have concocted.

He also clocked a lifetime best of 13:17.06 in the process, only – unlike the 1,500m – it wasn’t even close. He threw his arms wide in celebration long before crossing the finish line, his 54.05 last lap softly killing the rest of the 24-man field. It was also the second-fastest winning time in European history, after Britain’s Jack Buckner’s 13:10.15 from 1986.

He was expected to bow to his older sibling Henrik, 27, who had finished fourth in the 1,500m on Friday night – and had already won gold, silver and bronze in that event alone. Only, again, Jakob showed them all how it was done, the older brother settling for silver this time.

This was after his father and coach Gjert advised that Jakob celebrate his victory in the 1,500m “with a glass of warm milk”, then straight to bed.

Defending 1,500m champion Filip Ingebrigtsen would have been in the medal hunt too, but the brothers revealed he had withdrawn because he had broken a rib when falling in the 1,500m semi-final.

“I’ve been a professional runner since I was eight, nine, 10 years old,” he said. “I’ve been training, dedicated and following a good structure – the same as my brothers – from an early age. It was a little crazy to get this medal, this is huge. But winning a second title in two days is the result of having done this my whole life.”

It’s all been flagged, and well charted and aired too, in the 2016 documentary series for Norwegian TV, Team Ingebrigtsen, which offers an open and unparalleled insight into the family’s success (check it out on YouTube).

There’s an undeniable confidence about them too, an attitude that overtly rejects Nordic egalitarianism by openly stating: “We will be the best.” What is partly driving them is to be the best in the family – each of the brothers declaring and believing they are the better than the other two, no matter how the race actually turns out.

All three still live and train in Sandness, south of Stavanger. Together they have the look of a pop band, not elite distance runners, but there’s a ruthless streak about them too. “This is not a game for soft, emotional people . . . that’s just how it is,” says their father. Two older brothers left the sport after a few years of involvement.

There are no limits for us. We have another brother who is turning five years old, and soon can join the team

Jakob came to Berlin off the back of a demanding schedule at the World Under-20 Championships in Tampere, Finland where he picked up a silver medal in the 1,500m and bronze in the 5,000m. “It’s quite ridiculous that he’s won, he’s only 17 years old, that’s madness,” the father did admit.

“There are no limits for us. We have another brother who is turning five years old, and soon can join the team. In two years’ time, we will be back to win four medals, not just three. Right now, Jakob has two medals, and Filip and I have one each. We’re definitely coming back to improve the stats in our family.”

Indeed, all three brothers have now each won the European 1,500m title, helping to prove as well that the old blue-ribbon event still hasn’t lost all of its lustre.

With fellow Norwegian Karsten Warlhom winning the 400m hurdles on Thursday night, where Thomas Barr won bronze, Norway have now won three gold medals – and is one of the countries often compared with Ireland when it comes to sporting population and potential.

Also on Saturday night, Adam Kszczot won a record third consecutive 800m gold medal in a season’s best 1:44.59. A master tactician, he shot for home a little earlier than usual, after France’s Pierre-Ambroise Bosse, the reigning world champion, hit the front of the field just before the bell.

From 200m out Kszczot then went for it, leaving Sweden’s Andreas Kramer racing for silver, the tiring Bosse still happy to win bronze.