Ghosts of Owens and Hitler equally felt in Berlin’s Olympiastadion

Ian O'Riordan at the Berlin Olympiastadion 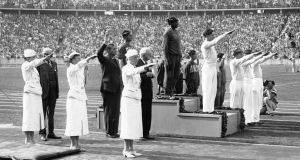 Jesse Owens at the medal presentation during the 1936 Olympics in Berlin. Photo: Getty Images

Hunter Thompson always said it’s a sad day at the desk when you start thieving from yourself. But something and everything about being back in Berlin this week has felt like a walk around old roads of the mind and of history, with a strong sense of being here before.

Specifically around Berlin’s Olympiastadion. Some sporting arenas strike you with their sense of scale and design, and others have bigger statements to make. No matter how much you’ve read or heard about it there’s a magnificently haunted air about the place, a bit like the old Roman Colosseum, and no prizes for guessing why. If the ghost of Adolf Hitler doesn’t get you first then the ghost of Jesse Owens will.

It may be 82 years since they left their shadow on the old ground, all perfectly spread out as the main stage for the 1936 Olympics, but such is their lasting attachment to the place they might well have been here yesterday.

Without Hitler the stadium would never have been built; without Owens it would never have been immortalised. They wrote completely different chapters into world history, but for two weeks in that August of 1936 their stories were unmistakeably intertwined, and the old Olympic Stadium makes no secret of that.

The place was destined for history even before 1936, as Berlin was originally chosen to host the 1916 Olympics, and we all know what happened next. When all was forgiven and Germany got their chance again Hitler promptly up-scaled the entire project: his master of propaganda Dr Goebbels had convinced him how useful the Olympics would be in promoting the new-born Reich, so using the same deep foundation of the old Deutsches Stadion, they built their then brand new 110,000-seater Olympiastadion – complete with 40,000 cubic yards of Germany’s finest marble, granite and travertine.

It’s now nine years already since the Olympiastadion was the stage for the 2009 World Athletics Championships. These days it seats a more modest 76,000, freshly brushed up for the 2006 World Cup, complete with a cool transparent roof, only rather than erase all traces of that old sporting and political propaganda, the history of it is still allowed pervade a place, as if some reminder of the dangers of it all.

In the spirit of the old Third Reich the whole place is also enormous, five miles west of the Brandenburg Gate, neatly spread over a green area of 350 acres. One of the main approaches is coming off the S-Bahn next to Jesse-Owens-Allee, the long boulevard renamed in his honour in 1984, four years after his death. One of the main entrances is through the West Gate, which according to a large photographic display right next to it is where Hitler himself entered throughout the 1936 Olympics.

Just inside the West Gate they’ve preserved the giant 10-ton Olympic Bell, a large crack down one side of it, which in an utterly symbolic way now partially obliterates the swastika at the bottom edge. All that sort of propaganda was so wrong, and the Olympiastadion will always be some sort of testament to that.

Owens, remember, came to Berlin in 1936 already destined for greatness having set five world records, and equalling a sixth, during an incredible 45-minute period at the 1935 American collegiate championships. But he still had to deliver on the big stage – and we all know what happened next there.

This week’s European Athletics Championships has echoes of being here in 2009 in other ways. It’s impossible to look down at the blue track and not recall the two world records that Usain Bolt ran here, his 9.58 for 100m and 19.19 for 200m, both of which might well need to be carved somewhere into that old travertine. History will judge that one.

There’s also the memory of Olive Loughnane winning gold in the 20km walk, or rather being promoted to gold three years ago, when the Russian Olga Kaniskina was eventually found out for serial doping offences, and when no amount of sporting propaganda could conceal it any longer.

Other Irish athletes found similar inspiration and a sense of history: Derval O’Rourke produced a brilliant 100m hurdles, finishing fourth in a national record of 12.67 (you can also carve into stone), having already become the first Irish woman to medal in a major sprint event at the 2006 European Championships in Gothenburg.

David Gillick raised a considerable spurt in making the 400m final, finishing sixth, and Paul Hession felt just two places short of sharing a line with Bolt in that 200m final. Still behind all that many Irish athletes struggled to meet the bar, let alone raise it, and others simply disappeared without leaving any trace.

Nine years later and the European bronze medal won by Thomas Barr in the 400m hurdles on Thursday night has already gone down in our sporting history: the first Irishman to medal in a sprint event at these championships after 84 years of trying. Barr also afforded us every conceivable play on that ‘raising the bar’ – not least in running the second fastest time of his life, 48.31, to seal bronze, and defying any sense of his Rio Olympic history, where he was just run out of the medals and finished fourth. It’s unfair to label any European medal as soft, but this was unquestionably one of the hardest 400m finals – the first time gold and silver were won with sub-48 seconds.

Ciara Mageean has also given herself every chance of repeating or even bettering the bronze medal won over 1,500m two years ago in Amsterdam, Sunday’s final a challenge she looks determined to meet full on. No one could have expected Leon Reid to make the 200m final, where he finished seventh, given he was only cleared to represent Ireland six days previously, but he’s already set himself his own standards and looks determined to meet them too.

In between all that it still felt like too few Irish athletes could find any great inspiration around the Olympiastadion, or at least raise the bar to heights not yet reached this summer. Medals can and always will help disguise that, as long as they don’t become sporting propaganda.

1 Jim McGuinness: There is a way to save championship and make it competitive
2 Waterford turn Kilkenny upside down and inside out
3 Sordid murder of hurling brothers still resonates in south Galway
4 Waterford’s frenzied waves of attacks too much for Kilkenny
5 Klopp furious as injuries mount and VAR decisions prove costly
Real news has value SUBSCRIBE
Here is your handy guide to sport on television this week