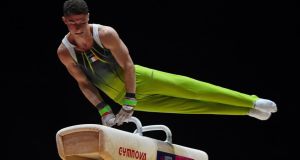 Irish gymnastics history was made in Glasgow on Sunday as 19-year-old Rhys McClenaghan claimed a gold medal in the pommel horse event at the European Championships – a first ever European gymnastics medal for Ireland.

The Newtownards man defied quality opposition in the eight-man field which included double Olympic champion Max Whitlock of Britain to score 15.300 and claim Ireland’s fourth medal of the Championships after Gary and Paul O’Donovan’s silver in rowing, Thomas Barr’s bronze in the 400m hurdles and Shane Ryan’s bronze in the 50m backstroke.

McClenaghan was fourth up in the final and celebrated enthusiastically after finishing a near-flawless 45-second routine which sealed his gold medal.

Whitlocks’ routine ended in disaster when he only scored 14.0 which ruled him out of medal contention and left the door open for McClenaghan.

The Down native had already made history by becoming the first Irishman just to reach a European gymnastics final and he didn’t stop there, going on to take the title.

He finished 14th at last year’s worlds in Montreal, but his fortunes have rocketed since, winning Commonealth Games gold for Northern Ireland with a tight win over Whitlock in Australia earlier this year.

“It’s incredible to be crowned European champion,” said McClenaghan. “It’s been a dream to be in that final with so many great names whom I’ve looked up to since I started in gymnastics.

“The worlds is the next big goal. I said after the Commonwealth Games that my target is to get that world title, and I meant it. I will go to Doha with every intention of winning that gold medal.”

Whitlock is maintaining his confidence in the long-haul process towards defending his Olympic crown and denying the pressure of outside influences.

“It’s just one of those days again and hopefully there won’t be many more of them,” said Whitlock, who had also missed an element in qualification and failed to reach the floor final.

“I know people will look at it like I went to the Commonwealths and didn’t get what I want, and I made a mistake here, but the second half of my routine was one of the cleanest I’ve ever competed, and with a new skill.

“I won’t obsess about this. I’m in it for the long journey. I’m hoping to go to two more Olympic Games and many more major Championships. I will use this one as motivation and to push forward towards the next one.”