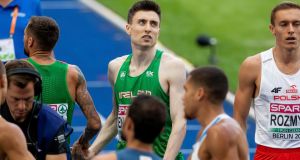 Mark English finished eighth in his 800m heat in Berlin - later being moved up to sixth place. Photograph: Morgan Treacy/Inpho

When he’s already stood on the European Championship medal podium - not just once, but twice - only Mark English must know what it feels like to be trailed off in his qualifying heat of the 800 metres. And what it must take to ever get back there.

At age 25, his potential over the distance at one stage projecting excitingly upwards, it’s an obvious demise, and English must know that too. He came to Berlin hoping for the best but instead realising the worst, finishing sixth in his qualifying heat in 1:48.98 - and originally eighth, two runners ahead of him later disqualified.

This is the same athlete who in 2012 finished fifth in the super-competitive World Junior Championships; two years later English won bronze at the 2014 European Championships in Zurich, running 1:45:03 behind gold medal winner Adam Kszczot from Poland - still the fastest qualifier here in 1:46.31.

English kicked on again in 2015, winning the silver medal at the European Indoor championships in Prague; then came a sort of plateau, and coming to Berlin he hadn’t yet broken 1:49 outdoors.

He does have the additional demands of his medical studies at UCD, with one more year to run there, only English wasn’t offering any excuses, or any real explanation either.

“The 800m is a rhythm race, and I just found it hard to find my rhythm, and the gears just weren’t there,” he said, his race effectively over at the bell when he was already drifting off the back. “I had a little setback during the summer, but I got over that, and I have come into championships before without racing very much. It just didn’t click from the get-go.

“Look, I wouldn’t put myself on the start line if I thought I wasn’t going to be able to give it 100 per cent, so I’m not going to put it down to anything.”

What is certain, he says, is the motivation to get back on top of his event is still there: only time will tell on that front, and sooner rather than later.

“Oh yeah, I mean that feeling of getting up on the medal podium four years ago is unrivalled by anything I’ve experienced in my life, so I would love to get back there. I don’t want to analyse too much in the heat of the moment, but I’ll chat to my coach and see where we go from there. I’d love to be back in that final, running for a medal. We’d all love to be. It’s not easy competition, the top-10 have all run under 1:45 this year, but I know I’m good enough to get back out there, compete for medals again.”

Four years after Zurich, three years after Prague, that feels like a long way off. Ireland’s other entry Zak Curran didn’t fare any better, running 1:49.31 to finish seventh in his heat, but at 24 also believing his best is to come, suggesting qualifying for the Tokyo Olympics in 2020 is his “lifetime ambition”. Time will tell there too.

Meanwhile back on the track later on Thursday evening it’s over to Leon Reid and Thomas Barr to go where no Irish male athlete has gone before: onto the medal podium of a sprint event in the European Championships.

Barr is up first, in the final of the 400 metres hurdles (7.15 pm Irish time); drawn in lane eight, he’ll certainly need to improve on his season’s best of 48.99 to come close to a podium finish, and join that strictly elite list of Irish medal winners at these championships: Delany, Murphy, Coghlan, O’Sullivan, O’Rourke, Heffernan, English, Mageean.

At 26 he’s in his prime and coming into form, and in truth may not get a better chance, even if running out in lane eight. The final includes two of the very best in the business in World champion Karsten Warlhom from Norway and Yasmani Copello from Turkey, plus Rasmus Magi from Estonia, who won silver four years ago, and the fast improving 22 year-old Patryk Dobek from Poland.

Then it’s over to Reid, who just five days after being cleared to represent Ireland, stormed his way into the 200 final (8.05 Irish time); also drawn in lane eight, Reid was nearly three years in limbo awaiting a transfer of allegiance from Great Britain, where he has already won sprint medals at both junior and under-23 level.

Now he’s got the chance to win a medal for Ireland on his debut: just turned 24, Reid’s medal credentials also include a bronze won for Northern Ireland over 200m back in April.

1 Monica Seles: The warrior queen who could have been the best ever
2 Séamus Power huffs and puffs as Wolff blows the door down in Detroit
3 Serpentine stays on from the front to steal Epsom Derby for Aidan O’Brien
4 Chelsea make light work of Watford to move back up to fourth
5 Glorious Greenwood as Man United thrash Bournemouth
Real news has value SUBSCRIBE