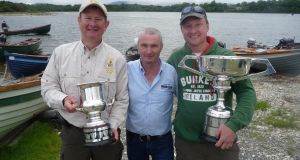 Ireland has a new world champion. Nigel Greene from Fermanagh took the crown after five days of competitive angling at the World Cup Trout Fly Angling Championships on Lough Mask in Co Mayo over the bank holiday weekend.

Cushlough Bay, on the shores of Mask, came alive for the championships as more than 450 anglers competed for the ultimate prize in trout angling. Now in its 62nd year, the event is widely regarded as the premier wild brown trout competition on the world angling stage.

Real excitement ensued amongst the large gathering leading up to the final placing announcement.

For the first time in the history of the competition, two anglers fishing from the same boat amassed 15 trout. Greene had seven fish while Michael Twohig from Kanturk managed eight. However, in the final count it was Greene’s seven fish that won the day with a weight of 9.772lb against Twohig’s eight for 9.286lb.

“Because we are two very competitive anglers, it was ‘nip and tuck’ all the way. We never moved from the Rocky Shore close to Lively Bay all day. My flies consisted of a Hedgehog pattern, Octopus and Green Peter. With two seconds in the championships, I thought I had it this year,” Twohig said.

The rule whereby only three fish are allowed to be dispatched was brought into play. Fourth and subsequent fish must be measured and verified by the boatman and fishing partner, and returned alive. An estimate of the weight is taken against the length and joined forces with weight of the three weighed fish.

The winner was presented with a 19ft Angler’s Fancy “Comfort Model” boat; a 15hp Yamaha engine and Sage rod and reel, plus the World Silver Perpetual Cup. Not bad for a day’s fishing!

A possible solution for treating toxic metal contamination in Welsh rivers has come from an unlikely source in the Amazon basin. Jonathan Jones, senior environment officer for Natural Resources Wales, has researched how to extract river pollutants using water hyacinths.

Trials using the sub-tropical floating plant removed 100 per cent of cadmium, cobalt and manganese, and 80 per cent of zinc. After three weeks, the plants are removed from the water to prevent the metals from leaching back in.

The research was part of an investigation into the Nant-Y-Fendrod river in Swansea that is failing to meet water quality standards.

Jones said: “Should the plant become established in the Northern Hemisphere due to the effects of climate change, its use in this technique may offer an appropriate way of managing its spread.”

As it is regarded as an invasive alien plant in the UK, its use would need to be controlled in purpose-built containment and treatment lagoons, under strict biosecurity measures.

However, the plant cannot survive the UK winter, so without a significant increase in winter temperatures, there is no risk of spreading.

A late cancellation has opened up four rods on the Fljotta River in Northern Iceland. Being in the north of Iceland, the salmon runs are later than on west coast rivers, and this three-day period is considered a prime slot.

Additional costs would include a shared 4x4 to drive from either Reykjavik or Akureyri, a guide and a cook. For bookings, contact Justin Maxwell Stuart on +44 (0) 208 123 3516.