Laura Muir wins 1,500m gold as Mageean misses out on another medal in fourth 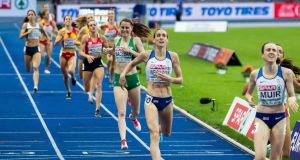 Faraway, so close. Only Ciara Mageean knows what exactly goes through the head when finishing fourth in a European 1,500 metres final, and she’s a little reluctant to share it.

“I can’t really say how that feels, because you’ll write it into the papers, and mummy will tell me off. But it’s something which rhymes with ‘uck’ . . .

“But that’s racing, I tried my hardest out there, it was hands-on-my-knees in the end, and I left my whole stomach on the stairs on the way up here.”

After running so smart and brave and in the end an utterly determined Mageean found that bronze medal just out of reach, Britain’s Laura Muir tearing the race apart to win from the front, taking over a full two and a half laps from home.

Mageean also knows exactly what that bronze medal would have meant, having won it in Amsterdam two years ago: here, she fell just short, losing out to Poland’s Sofia Ennaoui and Muir’s team mate Laura Weightman in the final chase for the line.

“Genuinely, you just think ‘ach, can we rewind’, and you just let me at that last 100m again, like you might say to your coach for the last rep. But of course the worst place to come, like being beaten by a point in the GAA.

“I went out there to bring a medal home for Ireland again. I’m bitterly disappointed to be finishing in fourth but I gave it my all out there in that race, ran a good tough race but fell slightly short of my goals. I’ll take a lot of strength too, learn from it, and take all that on for the future.”

In truth, even if given a rerun, there’s nothing Mageean could or should have done different: after a 70 second first lap, the proverbial crawl, Muir took over at 500, and ran the last two and a half laps in 2:36.28, properly fast, to win her first major outdoor gold medal in 4:03.32, having won double European gold indoors.

“I thought I had her, yeah,” Mageean said of that chase with Weightman. “I was on the shoulder of Ennaoui and I thought, okay, I’ll stick on her and then kick on. Then when I saw Weightman faltering I thought I have this, keep tall, but I sadly didn’t find another gear. She probably saw me coming on the big screen and had another injection.

“The goal was not to get too caught up in a hard burst if anybody took it on but everybody felt that was obviously going to be Laura - she’s the one who has run the fastest, 3:55, and I know I’m not quite there just yet.”

“The plan was slowly wind it up, which I did. Weightman just had an extra few metres that I couldn’t make up, unfortunately I didn’t have as much in the legs as I wanted in the home straight. But I’ll hold my head high. I gave it 110 percent out there in the Irish vest which I always aim to do.

“I’m going from strength to strength, another 4:04 performance. I definitely feel I’m stronger than I ever have been and that’s a good place to be. I’m always disappointed when it’s coming to the end of the season, but definitely much more to come, with another good strong winter behind me, with my new set up in Manchester, so I’m telling you, I’m looking forward to the years ahead in the Irish vest, and I’m telling you it is going to make me all the hungrier in the years to come.

“I also know that was a much harder field out there than the previous European Championships that I raced in. I had a good showing in the Irish vest and I want to come into championships and have the other girls look at me, see the green, white and gold flag and wonder what is Ciara Mageean going to do today. We’ll watch out for her, she’s got a good strong finish, she’s a good strong athlete. That’s what I want to be and that’s what I want my legacy to be in athletics, that I go out there and I lay it all bare on the track.”

No consolation either for another fourth place, as the Irish women’s relay team also just missed a place in their final by one spot, the young quartet of Joan Healy, sister Phil, Ciara Neville and Gina Apke-Moses, still running a national record of 43.30 - the fastest time never to make the final.

“We’ve got a great future ahead of us,” said 19-year-old Apke-Moses, who ran the anchor leg,””we’ve got many, many years to build, to prepare and to get things right. It’s quite exciting to think about how good we’ll be in the future.”

Earlier in the day on the streets of Berlin the Irish men’s marathon team finished a promising sixth best of the 13 teams: Kevin Seaward came through for a fine 15th place finish in 2:16:58, following on from his fourth place finish in the Commonwealth Games marathon last April - victory here going to Koen Naert of Belgium in a championship record of 2:09.51

Adding his name to the list of teenage European champions was the incredible Armaud Duplantis from Sweden, who at 18 won the pole vault with a world junior record of 6.05 metres. Wow.