The one annual sporting awards where the objective meets the subjective 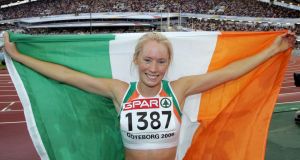 Here we go again. Because nowhere does the objective meet the subjective with greater fear or envy of gender bias than at your choice of annual sporting awards, which usually begins by everyone saying we’ve never had a year quite like this one before, have we?

That premise alone certainly puts 2020 in a category of its own, some deferring their awards simply because there wasn’t enough sport to celebrate, given the entire world was in lockdown for a fair chunk of it, others in the hope there will never again be another year to celebrate quite like this one.

Truth is, for many sporting events, it was indeed a year of slim pickings. Had the Tokyo Olympics gone ahead as originally scheduled, any Irish athlete or team who got anywhere near something as shiny and tangible as a medal was effectively guaranteed an award of some sort, man or woman, or at least one would hope so.

This year’s thinner spread of individual or overall sporting awards has also taken some of the fun out of trying to distinguish what counts or matters most within each chosen field, or indeed when pitting one sport success against the other. Points or goals? Medals or times? Height or distance? Throw gender into the balance and you get the sort of debate Ayn Rand could have written another very long book about.

Athletics is one of the few sports to judge things this way, entirely unbiased, going back to when Sonia O’Sullivan’s achievements were recognised with numerous awards not because she was a woman, but because her career was such an unrivalled success in itself.

Other sports have started doing it without apparent bias. Since Fifa revived their world player of the year, in 2015, both the men’s and women’s awards have been on the same bill. Bayern Munich forward Robert Lewandowski was named men’s player of 2020 on Thursday, beating off competition from last year’s winner Lionel Messi and Cristiano Ronaldo, on the same night Manchester City full back Lucy Bronze won the women’s best player award, becoming the first female English player to take that prize.

None of which takes from the enduring need and justification for an awards as naturally gender biased as The Irish Times/Sport Ireland Sportswoman of the Year, which started in 2004, and this year both defied and embraced the pandemic year to complete the 12 monthly award winners (recognising women for the achievements outside of sport during the lockdown) culminating in Friday’s naming of Katie Taylor as the outright winner for a fifth time, after successfully defending her world lightweight belts twice in 2020.

In ways Taylor is in a category of her own, further proven by the fact she was also in contention for the BBC World Sport Star award.

That may or may not be gender unbiased, Taylor nominated alongside US Masters champion Dustin Johnson, LeBron James, who led the LA Lakers for a first NBA title in 10 years, pole vault super star Armand Duplantis, unbeaten UFC champion Khabib Nurmagomedov (who won the public vote), and Wendie Renard, who captained Lyon to Champions League success for the fifth year in a row.

Again, Taylor is there not because she’s a woman, but because she’s among the very best pound-for-pound boxers on the planet. The overall BBC Sports Personality of the Year was started in 1954, and of the 65 winners to date only 12 have been women.

Other outright Sportswoman of the Year award winners haven’t always found that same sort of universal recognition for the achievements elsewhere, perhaps in part because they were women. Beginning with Cathy Gannon in 2004, champion women’s apprentice jockey, only operating in a mostly man’s world, or in 2015, when the overall award was won jointly by Cork camogie player Rena Buckley and footballer Briege Corkery. A year later, after Annalise Murphy won her Olympic silver medal in sailing in 2016, equalling rowers Paul and Gary O’Donovan, Conor McGregor was the RTÉ Sportsperson of the Year.

Indeed only three women have ever won that RTÉ award outright (since Barry McGuigan first won in 1985), and yes Michelle Smith is one of them (in 1996), along with five-time winner O’Sullivan, and Taylor, also in a category of her own in 2012.

Those RTÉ awards perhaps bring a more damning reminder of that need for an outright women’s awards, especially after what happened to Derval O’Rourke, hands down the best Irish sportsperson of 2006. As if winning a World Indoor Championship gold medal in the 60m hurdles wasn’t impressive enough - in Moscow, a hard place to win any athletics medal, her 7.84 still an Irish record, beating some of the best ever in the process, including Sweden’s Susanna Kallur.

A first ever senior global sprint title for an Irish woman, etc - O’Rourke came out later that summer and won a silver medal in the 100m hurdles at the European Championships in Gothenburg, beaten only by Kallur. (O’Rourke repeated that silver medal at the 2010 European Championships in Barcelona, beaten only by Turkish athlete Nevin Yanit, who three years later was busted for taking steroids).

O’Rourke was the outright winner of the 2006 Sportswoman of the Year, only for the RTÉ all-male judging panel of that same year - Eamon Dunphy, George Hook, Cyril Farrell, Ted Walsh, Jerry Kiernan and Pat Spillane - to agree to disagree, and give the award instead to Kilkenny hurler Henry Shefflin, a man no less, much to his own lasting bemusement and obvious embarrassment.

“I didn’t even know about Derval O’Rourke til about a couple of months ago,” Walsh famously said that December night, about the Irish woman who won World Championship gold that previous March. “I think it’s very badly advertised.” (I was in Moscow, and O’Rourke’s success was front of the sports supplement).

In the end, both Hook and Walsh had the sincerity to acknowledge that women’s sport doesn’t get the recognition it deserves, just before they failed to give O’Rourke the recognition she so obviously deserved.

It was against that sort of backdrop that the Sportswoman of the Year awards were started, and still feel the need to keep going, the one annual sporting awards where the objective meets the subjective with no fear of gender bias, Taylor’s winning in 2020 another timely and gentle reminder of all that.