For one night only: Ally Pally falls silent as the darts gets going 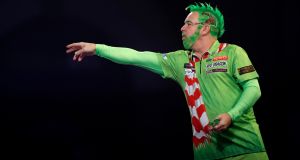 Peter Wright in action during his round two match against Steve West during the PDC William Hill World Darts Championship at Alexandra Palace in London, England. Photo: Luke Walker/Getty Images

Here today, gone tomorrow. Having taken the myriad precautions required to welcome limited but still sizeable numbers of arrow enthusiasts through the doors of Alexandra Palace for the duration of their World Championship, the Professional Darts Corporation had the rug unceremoniously pulled from under their feet just over 24 hours before it began. For the foreseeable future, if not the rest of the 16-day tournament, the best players in the world will have to go about their business without the lager-fuelled encouragement of the notoriously boisterous Ally Pally crowd.

“I will adapt to any circumstances and I will also follow the rules,” said Barry Hearn, the promoter and chairman of the PDC. “I just need some leadership, I need some consistency and I need some common sense. We’ve been through this pandemic now for nine months and we should have some idea how we should be dealing with it. Tell me what to do and I will do it, but make it fair. I can’t cope with these last-minute kneejerk reactions.” With the opening night of the tournament falling inside the deadline for London’s relegation to tier three, fans lucky enough to have acquired tickets found out what those who will now miss out could have won. Darts but not The Darts, played in a biosecure, plain clothes-only environment that made the evening’s entertainment barely recognisable from the far more bawdy and ribald World Championship sessions of yore. In a sport where matches are won and lost by millimetres, never underestimate the influence and energy of a crowd on a contest’s ebb and flow.

With punters banned from wearing their now traditional fancy dress, the usual preponderance of cartoon characters, super heroes and sombrero-wearing Mexican bandits who lend so much colour to this annual Christmas pantomime were sadly absent. It is a rule that could have prompted no end of disquiet if residents of the Marvel Universe, Scooby Doo or some actual Mexican bandits had turned up demanding entry, but mercifully this potentially awkward scenario did not unfold.

Those who did turn up witnessed an evening’s play that ended with Peter Wright, in clear breach of the aforementioned protocol, successfully negotiating the first step in his attempt to defend a title he won on the first day of a year that began surreally for the returning champion and got progressively more weird. Playing in empty rooms is not the stuff from which the dreams of world title winners are made, but the man known as Snakebite has been forced to ply his trade behind closed doors for most of what should have been a wonderful time.

Denied the rowdy acclaim that ought to come with winning his sport’s blue riband’s event, he has since added to his CV without enjoying his victory parade. “It’s been horrible for me personally,” he said. “At times I’ve been depressed and I couldn’t be bothered with it all, doing the hair and dressing up. But I have to think about the fans.”

Before Wright’s return, Diogo Portela was reduced to a blubbering wreck after causing the night’s big upset, winning his first match at the World Championships at the fourth time of asking. The Brazilian wiped the stage floor with Steve Beaton, who was gracing it for the 30th consecutive year.

The first Irishman on stage for this year’s event was Meath teenager Keane Barry who was beaten 3-1 by Jeff Smith.

Having dropped just one leg as he beat India’s Amit Gilitwala to advance to the second round, Steve West was forced to pull a double shift as he took on Wright in the evening’s closing game.

It did not go well for the Englishman. With his trademark mohawk, eyebrows, hair and beard dyed bright green to match an outfit topped off with hairy gloves, the defending champion made a typically understated entrance, whooping it up to the unbridled delight of his long absent public while he prowled the stage.

While the potential for total public humiliation was hugely increased by Wright’s decision to play wearing full Grinch costume, the defending champion survived a minor mid-match wobble that at one point threatened to leave him looking even more green around the gills. In the wake of his win, he revealed he was playing with a suspected broken rib. “It’s been killing me for about a week so I’m going to rest,” he said. “I was jumping over a fence and must have done something.” Despite his discomfort, this Grinch’s class told and while he may have his work cut out to win another world title, he did rob his far more soberly dressed opponent of his festive dream. – Guardian