Ian O’Riordan: The myth and truth of the barefoot runner 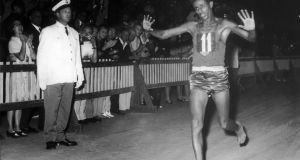 Abebe Bikila, who ran barefoot, winning the marathon at the Olympic Games in Rome in 1960. He defended his marathon title in Tokyo four years later wearing a brand new pair of Puma. Photograph: Keystone-France/Gamma via Getty Images

All I want for Christmas is a pair of my own two bare feet thank you very much. No need for wrapping paper or the receipt and no danger of getting the same present twice then is there?

There is a certain vintage of runner who can still relate to this humble request, not because they were born into such cruel poverty as to never imagine even asking for a pair of expensive runners, but because they believed they were simply born to run, and preferably to run barefoot too.

They’re not that far removed either – just a decade on actually from when barefoot running was made instantly fashionable again thanks in no small part to Christopher McDougall’s Born to Run, which spent four months on The New York Times Best Seller list and ended up selling over three million copies.

The book won plenty of admirers too, Amby Burfoot describing it as “one of the most entertaining running books ever”, and not entirely undeservingly so: subtitled A Hidden Tribe, Superathletes, and the Greatest Race the World Has Never Seen, McDougall set out to “discover” the indigenous Tarahumara Indians of Mexico’s remote and mountainous Copper Canyon, who according to myth would routinely engage in races of 150 miles or more wearing nothing more on their feet than thinly-soled sandals called huaraches, which effectively mimicked the simple mechanics of the barefoot runner, or the minimal-style running shoe once perfectly fashionable in elite marathons too.

McDougall, so often half-crippled by running injuries, later puts what the Tarahumara preach into some practice of his own, and feels “like a fish slipping back into water” as he runs barefoot around fields near his home in Pennsylvania, “like I was born to run”.

Con Houlihan always said a myth can be more powerful than the truth, and in part at least it seems the Tarahumara Indians are no exception. One of the immediate spin-offs from Born to Run was the sudden spurt in the sale of ultra-minimalist runners such as the Vibram FiveFingers, which offered nothing more than thin, flexible soles and some strapping, with small visible sections for each toe. Why pay big bills for bulky runners when you can buy these for around €100?

All this sounded like good business for Vibram, until March of 2012, when Valerie Bezdek brought the first of 154,927 lawsuits against the Massachusetts-based firm, which eventually cost them over €3 million in settlements; not because the FiveFingers were necessarily faulty, more because they’d overreached in claims they could make the feet stronger and the runner less susceptible to injury. There were select references cited there too, a 2013 study of barefoot running shoes suggesting that those runners given Vibram’s shoes were at greater risk of injury.

Daniel Day-Lewis tells a good story about playing the role of Hawkeye in Michael Mann’s 1992 production The Last of the Mohicans, set in the Adirondack Mountains of upstate New York during the French and Indian War of 1757.

Adopting the perfect method acting technique, as one does, he insisted on wearing the traditional moccasins of the time, until discovering they offered less than no grip when running across damp pine needles or slippery cliff edges. Which is why, in certain scenes deftly framed by Mann, he was running in a pair of Asics Tiger.

Long before Born to Run, Abebe Bikila first presented barefoot running on the global stage when winning the 1960 Olympic marathon over the cobbled streets of Rome wearing nothing whatsoever on his feet.

Careful not to puncture any myth or illusion, Bikila insisted he always felt more comfortable running barefoot, until he defended his marathon title in Tokyo four years later wearing a brand new pair of Puma. Truth is, before Rome, Bikila simply couldn’t afford to buy runners.

Now, this sometimes complicated relationship between the myth and truth of the barefoot runner is the subject of The Infinite Race, the latest instalment of ESPN’s 30 for 30 documentary series, which starts streaming online from Tuesday.

Directed by Mexican-American filmmaker Bernardo Ruiz, it sets out to tell the lesser known story of the Tarahumara, not just their “greatest race” now commercially known as the Ultra Maratón Caballo Blanco, which thanks to McDougall brought them global attention, but a community ravaged by the violent Sinaloa and Juarez cartels fighting for control, and where running isn’t so much a competition “as resistance to imposition”.

Born to Run looms continuously large in the background, and there is scene late on where one of the Tarahumara runners Silvino Cubesare is viewing footage of McDougal and a New York Times journalist running barefoot in Central Park.

“I don’t know what they’re thinking,” he says bemusedly. “Why do they want to run barefoot? I think they are crazy.”

Like Bikila, their preference for minimalist or indeed barefoot running was in fact born out of necessity, and like Bikila, if or when they had ever the means to purchase (or indeed were given) proper running shoes then there would only be one winner. Tarahumara activist Irma Chávez regards the barefoot running industry as an insult, not just to this myth but also the misconception it was somehow offering them some sort of performance advantage.

The Infinite Race also presents plenty of evidence the Tarahumara at times do feel like they’re born to run, for identity reasons as much as anything else, which is a good thing, and a reminder perhaps that McDougall may just have been overly clever in his some of his conclusions.

Any debate around the human foot, each made up of 33 joints, 26 bones and more than 100 muscles, tendons and ligaments, deserves some regular flexing.

Especially given many runners this Christmas may want a pair of the Nike Air Zoom Alphafly Next%, now available in the Eliud Kipchoge colourway, a full-length carbon-fibre plate embedded in the 40mm-high midsole and priced at a tidy €299.99. These being among the latest in the seemingly infinite race of top-end shoe technology that has helped bring about a continuous fall in road running times in 2020, and sure to be still perfectly fashionable 10 years from now.