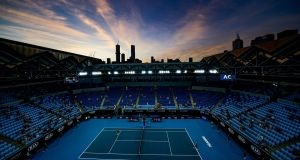 The Australian Open has been pushed back three weeks. Photo: Getty Images

The Australian Open will start on February 8th, three weeks later than scheduled, the ATP Tour said on Thursday in releasing an update of its calendar for 2021 revising the first seven weeks of the season.

The start date of the main draw of the tournament was originally slated for January 18th and Tennis Australia have been locked in drawn-out negotiations with local government over Covid-19 health security measures.

Organisers were still unable to confirm the start date on Thursday.

This year’s Wimbledon tournament was cancelled due to the Covid-19 pandemic, while the US and French Opens went ahead with the players confined to bio-secure ‘bubbles’, unable to leave their hotel rooms except to train and play.

The state of Victoria on Thursday recorded a 48th straight day without a case of community transmitted Covid-19 but many health restrictions remain in place in Melbourne, and international travel to Australia is still strictly limited.

The ATP said men’s qualifying for the year’s first Grand Slam would take place in Doha from January 10th-13th before players relocate to Melbourne to enter quarantine for two weeks.

The ATP tournament scheduled to take place in Adelaide has been moved to Melbourne to be played in the week commencing January 31st alongside another men’s warm-up tournament in the city.

A shortened version of the ATP Cup men’s team tournament, which made its debut this year in cities around Australia, will take place in Melbourne from February 1st-5th before the Grand Slam begins on the following Monday.

The ATP season will now open with tournaments in Delray Beach, Florida and Antalya in Turkey from January 5th-13th before preparations for the trip to Melbourne Park begin.

The Auckland Classic and New York Open will not take place this year, the ATP said, while the Maharashtra Open in India and Rio Open in Brazil will be rescheduled.

“The reconfigured calendar for the start of the 2021 season represents a huge collaborative effort across tennis, under challenging circumstances,” said ATP chairman Andrea Gaudenzi.

“Health and safety will continue to be paramount as we navigate the challenges ahead.”