Ian O’Riordan: The Racer’s take on doping in cycling is a dramatic winner 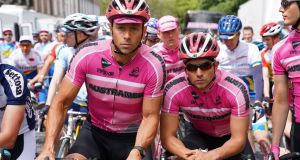 I’d a rough night on Thursday, waking up a few times with a strange and disturbing urge to jump out of bed and check my vital signs. Not when falling asleep after watching the latest updates from the US Election, but after a special preview screening of The Racer.

There are a couple of scenes where the lead character, Dom Chabol, does exactly that – his night disturbed by a heart-rate monitor to ensure he doesn’t die in his sleep after a fresh blood transfusion and injection of EPO. He’s not alone either, and not the only reason why The Racer made such a dramatic impression.

Over the years all films about my two favourite sports have, like Italian cars and Dylan covers, been approached with some caution. Chariots of Fire turns 40 next year and is still running ahead of the rest and don’t tell me the enduring standard in cycling isn’t Breaking Away.

That 1979 triumph is certainly the last pure cycling film to collect a Best Picture nomination, for director Peter Yates, and win the Academy Award for Best Original Screenplay for Steve Tesich. And it remains instantly nostalgic and wonderfully timeless, somehow cutting to the core of cycling’s existence, a reminder of why and how the sport has a mysterious way of constantly redeeming itself.

Tesich nearly repeated the trick in 1985 with American Flyers, this time with Kevin Costner his leading man on the bike, two years before The Untouchables made him a Hollywood superstar. There have been other worthy efforts, The Program from 2015, a biographical drama about Lance Armstrong based on Seven Deadly Sins by David Walsh, mostly watchable only largely predictable.

The Racer arrived virtually this week with thanks to the Cork International Film Festival, which goes online nationwide from Sunday, and has given its opening night gala to the joint production from Ireland/Luxembourg/Belgium – a film that is all about professional cycling and its doping past and ends up a beautifully timeless and perhaps timely lesson about both. Now read on.

It is set entirely against the backdrop of the 1998 Tour de France coming to Ireland for its opening three stages, that particular Grand Départ now infamously remembered for blowing the lid off cycling’s Pandora’s Box, for a while anyway. The various plots and characters are all entirely or else loosely fictitious, this shifting of gears between various levels of historical accuracy its absolute strength rather than weakness.

The above-mentioned Chabol is the aging domestique rider of Belgian team Austrange (their bold pink jerseys clearly reflective of the old German Team Telekom), their big rivals for this Tour being the French outfit Setossa, which turns out to bear some resemblance to the Festina team, especially when their soigneur is arrested at the French border on his way to the Tour, in possession of 234 doses of EPO, 80 flasks of human growth hormone, 160 capsules of testosterone, etc.

Beyond a brief cameo from Paul Kimmage to tells us this is “quite frightening”, The Racer doesn’t overly concern itself with how drugs like these work in cycling, but rather why any cyclist would risk taking them in the first place. Like when one of Chabol’s team-mates asks about the side-effect of a blood transfusion and is told: “If you don’t take it, you won’t win.”

It probably helps that this is a cycling film made by non-cycling people, director Kieron J Walsh injecting some of the same jet black humour as he did in previous productions such as The Savage Eye, and while co-writer Ciaran Cassidy is a fan of the sport, his expertise is in the sort of plot and character development recently displayed by co-producing the podcast Where is George Gibney?

That The Racer is viewed largely from Chabol’s side of the sport is also a good thing: the 38 year-old domestique has given his life to cycling and now has few prospects beyond it, his role not just to protect Austrange’s Italian team leader Lupo Tartare Marino, but to babysit him also, in the glamour of their three-star hotels or else the back of their team bus.

Chabol can’t even enjoy his plate of plain pasta for fear of gaining weight, his story a mere footnote in the race coverage seen in The Irish Times, the loneliness of his existence further caught when his estranged sister calls from Belgium to say their father has died, and still he puts the Tour before the funeral. “Without a bike, I’m f***ing nobody,” he says.

Worse still his place on the Austrange team is suddenly given over to a younger domestique, after which the film’s plot, like the blood of the riders, thickens up nicely. Chabol, left alone at the bar, trying to negotiate a rival contract with only a Boyzone song for company, hooks up with Lynn Brennan, a young Irish doctor working as an intern on the Tour for UCI, the governing body of world cycling, and with that begins an epiphany of sorts.

Not before he’s suddenly back in the race, that younger domestique ending up in hospital, presumably after a dodgy transfusion, prompting Chabol to get properly tanked up, knocking on the door of their smoking, burger-eating team soigneur Sonny McElhone, who (spoiler alert) does end up dropping dead, getting a little too high on his own supply.

“Now I need you, get your shit together,” Chabol is told by the Austrange manager affectionately known as Viking, only instead of being militant about it Chabol is positively buoyant, back on his bike in the Wicklow Mountains and duly helping Tartare win the first stage finish into Dublin ahead of their big rival Stefano Drago of team Setossa.

That night Brennan rescues him from dying in his sleep, and his secret is suddenly out: “You’re a professional f***ing loser”, she tells him, which in fairness to Chabol he takes reasonably well. By then even the young neo-pro of the team, Lionel Dardonne, is beginning to understand that nothing in cycling can be won without doping.

With his exit strategy in place, Chabol shoots himself up for one last magnificent hurrah on the third stage in Ireland, from Enniscorthy to Cork, this time getting his just reward. Suitably greeted by another kiss of love and betrayal by his team leader, Chabol couldn’t possibly ride off into the sunset now, could he?

The Racer may ultimately capture that period of cycling where doping was so embedded in the sport that the only crime was getting caught, but 22 years later it’s a reminder too why Sam Bennett and Dan Martin are constantly thanking their team domestique, their Chabol without which no riders ever wins.

The Racer screens as part of the 65th Cork International Film Festival from this Sunday, to book see corkfilmfest.org