Win at All Costs: Tracking the culture of cheating in running 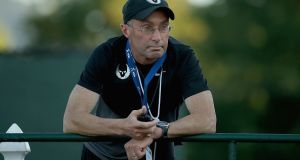 Distance running coach Alberto Salazar was handed a four-year ban by the US Anti-Doping Agency in 2019 for a series of doping violations. Photograph: Andy Lyons/Getty Images

Win at All Costs is probably not the most original or catchy title for my choice of sports book of the year. Actually, this could have been the same title for any of my top three, each of which lifts the lid and shines a light onto some of the dark secrets and lies behind what some consider the cost of winning on the track and field.

Why stop there? Any sports book worthy of a prize these days could probably explore a similar mentality around winning or indeed success, whether in professional football, rugby, cycling, boxing and so on, and in many cases probably justify it too. It’s easy to see without looking too far that not much is really sacred.

Anyway, two of these came out last July and deal exclusively with the Russian doping scandal, and which come in now as a sort of tie for the runner-up prize. Because both could just as easily be filed under pure fiction as sporting fact and happily let the truth get along perfectly fine with a good story.

As it turns out, The Rodchenkov Affair: How I Brought Down Putin’s Secret Doping Regime this week won Dr Grigory Rodchenkov the William Hill Sports Book of the Year award, worth a tidy £30,000 and a leather-bound copy of his own work. How exactly Rodchenkov will collect his prize is unclear given he’s been hiding out in witness protection somewhere in hills outside Los Angeles for the last five years.

It’s already a familiar story to anyone who watched Icarus, the 2017 documentary which won an Oscar for Bryan Fogel, where Rodchenkov first revealed his clandestine range of dirty tricks to both evade and cover up positive drugs tests when head of the Moscow Anti-Doping Centre, particularly around the 2014 Sochi Winter Olympics, after which he ended up in the “top five on the Kremlin’s worldwide hit list”.

What could be considered a sort of spin-off or prequel is The Russian Affair: The True Story of the Couple Who Uncovered the Greatest Sporting Scandal by David Walsh, which is part thriller, part romance and all about the original Russian whistleblowers Vitaly Stepanov and his then wife-to-be Yuliya Rusanova. It was Stepanov, an anti-doping officer in Russia, and Rusanova, one of their top 800m runners, who found common ground and first went to the World Anti-Doping Agency, the lofty protectors of clean sport. Only when their story went out on German TV did it gather pace and, five years on, Russia is still trying to appeal its way back into Olympic sport.

Following a parallel timeline and universe, and ultimately revealing as much, is that neatly titled Win at All Costs: Inside Nike Running and Its Culture of Deception, by Colorado-based journalist Matt Hart, which more or less deals exclusively with the secrets and lies behind American distance running coach Alberto Salazar and his now-defunct Nike Oregon Project.

Published in October, a year since Salazar was handed a four-year ban by the US Anti-Doping Agency for a series of doping violations, it’s suitably paced and distanced, 416 pages in all, including 50 pages of notes and sources. The book was three years in the works, beginning when Hart received (from a still-unknown source) a USB drive in May 2017 containing a single file: a 4.7-megabyte PDF named “Tic Toc, Tic Toc...”

This turned out to be a draft report from the investigation into Salazar and the various allegations of his pursuit to win at all costs, including those from former assistant coach Steve Magness, which gave Hart his front-page story in the New York Times and in turn drew in Salazar’s former star athletes-turned-whistleblowers Adam and Kara Goucher.

There aren’t many fresh revelations in Win at All Costs; most have been well documented already, going back to the BBC/ProPublica investigation in 2015, which aired as Catch Me If You Can and first put the spotlight on Mo Farah’s improvement after he joined the Nike Oregon Project in 2011, and the concerns around Salazar’s practice of dishing out prescription medications on a whim rather than any science (in cahoots with a Houston-based endocrinologist named Dr Jeffrey Brown) and experimenting with testosterone on his own sons as a way of determining what might trigger a positive test.

Without presenting definitive proof that any of Salazar’s athletes knowingly or otherwise took banned substances, the book exposes that culture of deception within Nike and not just around running, and makes for a disturbing read. Hart deliberately sets out his story against the history of Nike, going to back to enterprising former Oregon runner Phil Knight and his coach Bill Bowerman, who co-founded the company as Blue Ribbon Sports in 1964 (indeed, this book is best read with a regular side serving of Knight’s 2016 memoir Shoe Dog, to best understand the origin of these ruthless species).

Because from those early years it appears as if Nike was setting at least a part of their winning culture against what they considered to be going on in places like Russia and the former East Germany – that “doping is coping” – which is also why they also dubbed the original Nike Oregon Project team as Athletics West (in contrast to the East).

This perhaps also partly explains Nike’s apparent disinterest in the doping allegations that over the years gradually surfaced around Lance Armstrong, Marion Jones, Justin Gatlin et al. It was after all Scott MacEachern, Armstrong’s personal Nike representative, who first suggested they commemorate his fifth consecutive Tour de France victory with something people could wear to show their support, such as a yellow wristband. This LiveStrong movement was something Nike continued to support right up to Armstrong’s eventual downfall in 2012.

The allegations of emotional abuse and body shaming levied by former athletes Mary Cain and Amy Begley in the New York Times, only after Salazar was banned in October of 2019, appear in the back in that culture too, specifically when Hart lifts the lid on the previously off-the-record battle over Nike’s decision to suspend Kara Goucher’s contract after she got pregnant.

And whatever about Salazar’s apparent ease with himself that the ends could always justify the means, his selfish and often confrontational manner isn’t spared. Worse still, some of his methods seem to be masquerading as gobbledygook.

It’s also why in the end some of the culture within the leafy Nike campus at Beaverton, Oregon doesn’t feel far removed from that of a cold Moscow lab or indeed a Russian doctor in witness protection. Salazar’s appeal against his four-year ban is currently being heard by the Court of Arbitration for Sport, a decision pending. It’s probably cost him his career and reputation already, but Salazar is denying all doping violations, Nike is happy to support his appeal, and no prizes for guessing their mentality.