Charley Pride: The country music star with a baseball dream 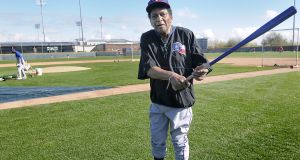 In the end days of Negro League baseball, the Louisville Clippers’ touring bus breathed its last on a jaunt through Mississippi and there was no money to buy another. Hearing of their rival’s plight, the Birmingham Barons offered a second hand replacement, in return for a couple of contracts, including that of a promising 20-year-old pitcher/outfielder named Charley Pride. Blessed with a decent fastball and the ability to hit the curve, the kid only lasted a month in Alabama before being traded on again. Enough time to leave his mark on the place.

“We had Charley Pride for entertainment,” said Cleophus Brown, then of the Barons. “He had a little old three-string guitar. He didn’t even have a good guitar. He’d keep going until we made him stop playing. We’d tell him to cut it out. Don’t be singing that country music.”

When Pride died of Covid-19-related complications last Saturday, country music mourned the passing, at 86, of its first black superstar. He sold over 70 million records, amassed 29 number ones, and, most significantly of all, broke the colour barrier in perhaps the whitest of all genres. He also won favour far from home by playing four gigs at Belfast’s Ritz Cinema at the height of the Troubles in November, 1976, a time when other international acts were staying away. Then again, Pride knew more than most about living in adversity.

Born in a shotgun shack in the Mississippi Delta, the fourth of 13 children raised by sharecroppers, he grew up picking cotton alongside his father, Mack, in the fields, dreaming of escaping the segregated “Jim Crow” south. When he saw Jackie Robinson become the first black player in the Major Leagues with the Brooklyn Dodgers, he figured baseball might be the quickest way out of the town of Sledge (pop. 475).

The plan was not without its flaws. A deacon in the local Baptist church, his father Mack frowned upon Charley and his brother, Mack jnr, playing baseball on the Sabbath and often whupped them with a leather strap for doing so. Eventually, a superlative performance in a sandlot exhibition against the barnstorming Memphis Red Sox and mischievously trimming four years off his age (he told them he was 15 to give himself the air of a teen phenom) earned him a pro contract worth $100 a month.

After catching the eye of the New York Yankees, his time with their minor league affiliate in Boise, Idaho was cut short by an injury to his pitching arm. Then he embarked on the typically peripatetic existence of every baseball wannabe. Following two years in the military, a failed try-out with the California Angels afforded another tantalising glimpse of the majors. Faraway. So close. Still determined to somehow find a way to play, he moved to Montana where Anaconda Copper Mining offered minor leaguers a job worth $20 a day if they also togged out for the East Helena Smelters semi-pro team in the evenings.

His stint there yielded state championships and an incident that changed his life. He got on the PA at the ballpark one night and entertained the crowd with an impromptu rendition of Lonzo and Oscar’s “There’s a hole in the bottom of the sea.” The response was so positive that his singing interludes became a regular feature at games and led to gigs in local honky tonks whose predominantly white clientele had never heard a black man singing country before. Pride had grown up listening to nothing else because Mack wouldn’t allow the Blues, “the devil’s music”, in the home.

“My intention was to be the greatest baseball player that ever lived,” said Pride. “Anytime somebody said that I should be a singer, I’d always tell them, ‘Well, that’ll come later - first I need to get to the big leagues and break some records.’”

Even as his trademark velvet baritone delivery won more and more admirers, Pride wouldn’t relinquish his stubborn sporting dream. In one last, demented effort to convince the New York Mets he was worth looking at, he dispatched six bats with his name stencilled on them to their spring training camp in St. Petersburg, Florida. Then he turned up himself, hoping the then worst team in the sport might give him a shot. Except they saw right through the ruse and put him back on a cross-country bus bound for Montana.

Dejected, closing in on 30, he stopped off in Nashville to look up a pair of Grand Ole Opry stalwarts who’d offered encouragement when they heard him singing Hank Williams standards one night back in Helena. After encountering initial scepticism and inevitable racism, he eventually cut a record called “The Snakes Crawl at Night” and was still releasing albums five decades later. Some of those early singles were often sent out to radio stations with no accompanying promotional photographs and, before he was well-known, he often walked on stage to hear at least one person in the front row shout-whisper, “he is!”

With celebrity came riches, recognition and, best of all, an annual invitation to spring training with a Major League team. Well into his seventies, he spent a couple of weeks each year working out in pre-season with the Texas Rangers, becoming a minority shareholder in the club, and singing the national anthem before Game Five of the 2010 World Series. He made it to the show. He became the show.