Breakfast time in Kilkenny is prime time in Melbourne, just past midnight in Las Vegas 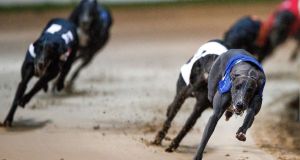 The first ever early-morning meeting in Irish greyhound racing got underway in Kilkenny on Wednesday. Photograph: Inpho

It’s 9:18 on a Wednesday morning and the hare is running and the traps are up. Of the dozen people in the stand at St James’ Park in Kilkenny, four are journalists, three are from the Irish Greyhound Board and the rest are owners. Just a shade over 30 seconds later, Pops Miracle is first across the line, followed by Rathbawn Paddy and Kits Dilemma. Three dog, two dog, five dog. With that, the first ever early-morning meeting in Irish greyhound racing is underway.

“We wouldn’t be expecting any in from the general public,” says Ger Dollard, chief executive of the IGB. And why would they? People have enough excuses to stay away from race meetings without throwing a battle with school traffic into the mix. But of course, this new venture isn’t aimed at the public. Not the spectating public, at any rate.

“There’s a lad sitting in Australia with a pint in front of him and this is on the telly in the corner,” says bookmaker Aidan Brophy. “That’s who it’s for really.”

Here’s how we got here. Global broadcast company Sports International Services (SIS) bought into Irish greyhound racing in 2016 and has gone about shaking up the way the sport is presented here ever since. SIS provides content to betting shops and TV companies all over the world, feeding a constant need for something to gamble on. It may be 9:18am on the Freshford Road in Kilkenny but it’s always bet o’clock somewhere.

And so for a trial period of the next six months, SIS will bankroll early-morning meetings in Kilkenny and Waterford. From January onwards, the first race will be off at 8:12, even though by law, betting shops can’t open in Ireland before 10am. In the UK, they open at 8.30. Early-worm punters across the Irish Sea will get in for the third race.

But again, even that’s not who this is for. SIS relay the pictures from here to markets all over the betting planet. Breakfast time in Kilkenny is mid-afternoon in Delhi, knocking-off time in Hong Kong, prime time in Melbourne and just past midnight in Las Vegas. And though the punters in those places can’t possibly have the slightest idea that Pops Miracle is, according to the racecard, a “competitive sort who stays the trip strongly”, they will plonk their money down all the same and hope the three dog does the business.

All of which makes the dog track in Kilkenny nothing more than a tiny twinkling pixel in the vast global betting picture this morning. Six races, all sponsored by SIS, with prizemoney for all runners. That last detail is not unimportant, providing as it does an incentive for small trainers and owners in the locality to bring their dogs along for the morning. The entry fee for each race is €10 and the worst you’ll do is double your money, with fourth, fifth and sixth places all paying €20.

“People aren’t coming dog racing,” says bookie Ted Browne. “For the last year here, Wednesday nights wouldn’t have 40 people paying through the gate. I’d see nights when there’s only 20 people here. There’s no future in that so they have to try something different. They’re trying this now and it means an income for everyone. The track is getting paid and they’re putting in a new stand so it’s helping that.

“For us, it means we’re getting paid as well. By law, they have to have at least three bookmakers here. So they pay us to be here and we divide it between us. There’s five of us here and it’s worth around €120 apiece for the morning. And then whatever small bit we take. So that’s a help too.

“The real important thing is for the small dog owner or trainer. You’re talking about average dogs here - you look at any of the races on the card there and you’d buy all six dogs for less than a grand. But they come here and they’re guaranteed prizemoney even if they come fourth, fifth or sixth. That’s a big help to these lads, it keeps the small lads in the game.”

Apart from the crack-of-dawn start time, none of this is particularly new, be it in greyhound racing or horse racing. Meetings take place every day everywhere purely to shovel ever more coal into the gambling furnace, with the overwhelming imperative the provision of content. Meetings like this exist solely to pack the schedules fed by SIS the world over. Actual boots-on-the-ground punters are more or less an inconvenience.

“I was talking to the manager of one of the racecourses recently,” says Browne, “and he was saying he had only 100 people through the gate at one of the midweek meetings. I said, ‘Christ, that’s terrible.’ And he said, ‘Ah no, sure if there was many more than that I’d have to put on extra staff.’”

As Race Three rolls around, fog has enveloped the track, cutting it off from the two-up-two-down housing estate that overlooks it. A lady wearing an IGB jacket reminds the five bookies that there’s seven minutes to the off of the 9:52 and they hop to their pitches and mark up the odds. By the time the traps go up, they’ve taken the sum total of 10 bets between the five of them.

Meanwhile, out in the world, a babel of smartphones and laptops and betting shop screens chirp away. Sherkin Dancer takes it from Ballygur Mel by half a length, with Gooches Choice back in third.

Or, as they will have announced it in Sydney, one dog, five dog, six dog.