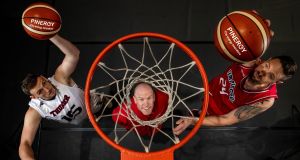 Old rivalries are set to come to the fore once more this coming Sunday afternoon, as last year’s Hula Hoops National Cup finalists, DCU Mercy and Ambassador UCC Glanmire go head-to-head in the quarter-final of this year’s competition.

Last January, DCU Mercy halted Glanmire’s quest for five cup titles in-a-row at the National Basketball Arena in the final, pipping the reigning champions in thrilling fashion to win out by just one point (72-71) to secure their first senior cup title since 2011.

DCU’s Sarah Woods was crowned MVP on the day and fast forwarding to this Sunday, there’s no doubt she’s set to lead the way once more, ably supported by Aisling Sullivan and young stars including Bronagh Power Cassidy and Rachel Huijsdens.

The sides met just last weekend in the Women’s Superleague where DCU Mercy came out on top by 20 points, 83-63, and DCU coach Mark Ingle is looking forward to another tough challenge.

“The rivalry is alive and well between us. It’s a new Glanmire team, but they’re a very good team. It was a good game between us last Sunday and we’re looking forward to another good game and a big crowd at DCU next Sunday.”

Glanmire, for their part, will be looking to avenge last season’s cup final loss, and last weekend’s league defeat. Annaliese Murphy will be one to watch on the day along with the experienced Áine McKenna and Casey Grace and the sharpshooting I’mani Davis.

Glanmire head coach Mark Scannell said: “The cup is very important to us. We have a young team and will have our ups and downs. We didn’t perform last Sunday against DCU, they were very good and we have to bring our best performance this Sunday to get through this very difficult fixture. We’ll focus this week on what we can control, and hopefully we’ll get the win.”

Elsewhere, Women’s Superleague leaders, Courtyard Liffey Celtics will be hoping their unbeaten start to the season will carry into this weekend when they host Maxol WIT Wildcats in their quarter-final clash.

“We are really excited for this cup game against Waterford, ” said head coach, Mark Byrne.

“We know the cup is special and it would mean a lot to us if we were able to have a good run this year. We had a tough league game against them back in October and, from the look of their results since, they have been going very well so we’re expecting a tough game.”

IT Carlow are on the road to Cork once more for a quarter-final battle with Singleton SuperValu Brunell. Brunell had the better of this fixture in the Women’s Superleague two weeks ago, but Carlow will no doubt be prepared for battle this Sunday.

The final quarter-final pairing of the weekend sees the meeting of Fr Mathews and NUIG Mystics in Cork. Mathews, who won the Women’s Division One Cup last year, will be hoping to reach their first ever semi-final at this level, while NUIG Mystics will be aiming to cause an upset, as they come into the game as underdogs having not won a game yet this season.

The Division One cup quarter-finals are also on this weekend. Unbeaten Maree are on the road to Limerick Celtics, Trinity Meteors host Ulster University Elks, Swords Thunder welcome Team Tom McCarthys St Mary’s, while Portlaoise Panthers are away to Fabplus North West.

It’s normal regular season action over in the Men’s Superleague, with 10 of the 12 teams on court this weekend.

C and S Neptune are on the road to Griffith College Swords Thunder while a big clash is expected in DCU as the Saints welcome Keane’s SuperValu Killorglin.